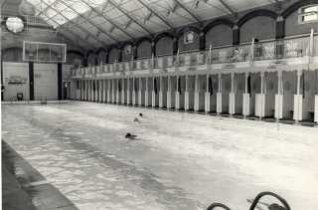 In the early 1950/60s, North Road Baths were both swimming baths and public baths. The swimming baths were certainly used by the Downs Primary School – I gained my 10 and 25 yards proficiency certificates there. Everything consisted of white tiling and the changing cubicles were around the side of the pool. Everyone had their own cubicle for changing in.

I also remember when we first moved into a house in Dyke Road Drive (number 7) in the late 1950s, it had no bathroom and, until this was built, all the family used the public baths in North Road. These baths were huge, all located in separate cubicles, green-painted with green lino floors. Hard scratchy towels were provided. Every now and then you would hear someone shout “More hot water in number 3, please”! I also seem to recall that there were separate session times for men and ladies.