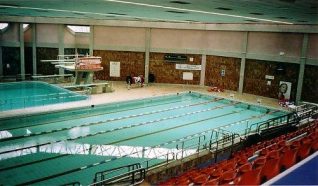 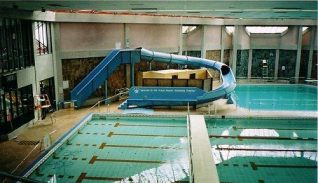 I thought I would add some pictures of the Prince Regent Pool and some information that I have learnt whilst swimming there.

Location and teams
The pool was built in the 1970’s to replace the pool that was closed in the town. It is situated around the corner from the historic “slipper baths”. It is also just across from the new Library, which will hopefully mean that a few more people pay attention to the fact that pool is there. The pool is one of the busiest pools in the South East, owned by the Council but managed by a separate company. It is used by two swimming teams, the “Brighton Swimming Club” and the “Brighton Dolphin Club”, and the Lesbian and Gay Sports group hold their swimming meetings there. It also has weekly sessions for the over 50’s and for women only.

Here are a few things you might find interesting: