You are here: HomenextPlacesnextStreetsnextBelgrave Square, PortsladenextSlum clearance in the 1950s

Slum clearance in the 1950s 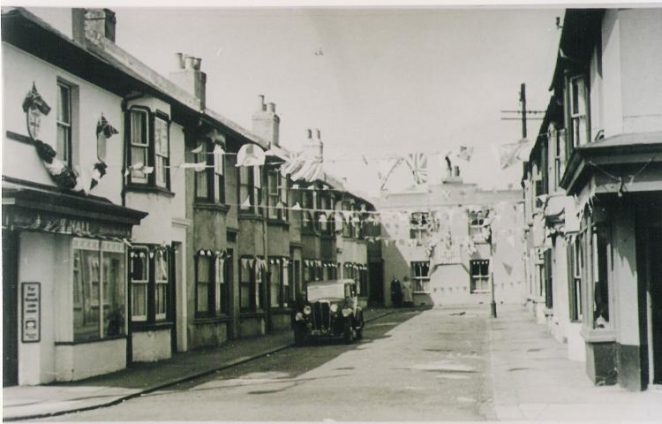 Belgrave Square, Portslade ready for the VE Day Celebrations on 8 May 1945

Slum Clearance
Belgrave Square was located off of Wellington Road in Portslade and was the first road west from the bottom of Station Road. The houses were removed as a part of the slum clearances of the North Street area of Portslade in the mid 1950’s. Most of the occupants were moved to the then newish council houses in Mile Oak. A bus stop now sits at what was the entrance to Belgrave Square.

The lady in black at the bottom of the road in the photograph may well be my maternal great-grandmother, Fanny Callingham. While she actually lived in the first house in the square, after the corner shop on the right- hand side, when she was ill she stayed with one of her daughters. Her daughter was Daisy Medlock, who with her husband Joe and children Carole and Norman, all lived in the last house down on the left-hand side (on the lady’s right in the photo).

Other members of the family

Another of my great-grandmother’s daughters, Nellie, with her husband Percy Botting and children June, Eileen and Percy Junior, lived next door to my great-grandmother, in the second house on the left. My grand-parents, Kate and Edgar Smith, with my mother Kitty, my uncle Fred and auntie Vi, lived further down on the same side of the square, until 1942 when they moved to 9 Seaford Road in Hove, just around the corner. Opposite my grand-parents lived a Mrs Barnard, who brought up my grandfather, Edgar Smith, and his three siblings alongside four children of her own.

I am very grateful to my uncle Fred, who was Leonard Frederick Smith, for his help in drawing up the map of who lived where in the square c1942. As this shows, out of a total population of 37 people living in 14 properties, my family accounted for 17 people in 5 of them; not allowing for Gran Barnard as she was known to the family. I can just about remember my Grandmother taking me to visit her Mum before she died around about 1953/4; I was born in January 1949.

In earlier reminiscences of Belgrave Square, I seemed to remember a horse drawn coal wagon delivering sacks of coke to what I thought was a foundry on the last site down on the left-hand side. However, with the help of my uncle Fred’s map, I can now see that this was a stable for the horses of Mr Drew, the coalman, and Mr Hamblin, the rag and bone man. Fortunately for me though, my memory is not quite that bad after all, as uncle Fred also tells me that many castings used to be taken into the stables for fettling by a couple of labourers who worked there. Also, I do remember Granny Callingham taking great delight in sending me out with a medium sized tin, minus the lid, to pick up any lumps of coke Mr Drew the coalman had dropped when he came back to the stables.

Click on the diagram below to open a large version in a new window – click again to make larger. 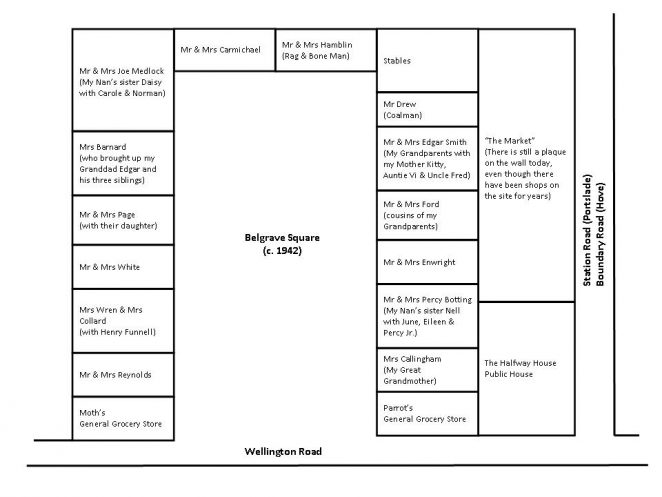