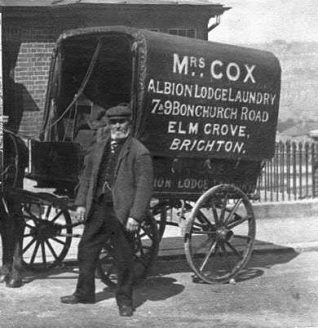 Query:
The following query was posted on the website message-board by John Blackwell, on 04/08/2002:

“Does anyone have info on a Cox’s laundry at 7/9 Bonchurch Road? It might have been called the Albion laundry. The laundry was run by my great-great-grandma Sarah Cox (nee Major), as her husand preferred his job as engine driver, occasionally on the Royal train. I don’t recognise the man in front of the laundry van and the year could be anything from pre 1880 to 1920’s.”

Response:
The following response was posted on the website message-board by John Blackwell, on 04/08/2002:

“7/9 Bonchurch Road are private houses, contemporary with the building of the street, so were presumably the ‘offices’. Next door is a block of later post-war housing on the site of the laundry. The 1939 street directory shows no laundry (so it had closed by then) and a gap in numbering from 11-15 inclusive.”