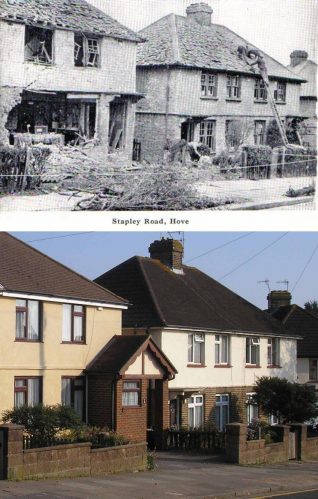 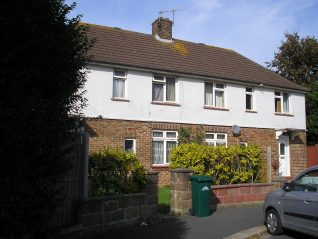 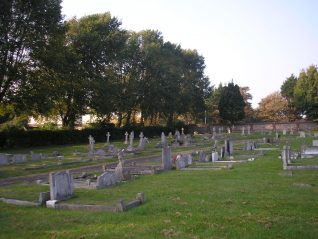 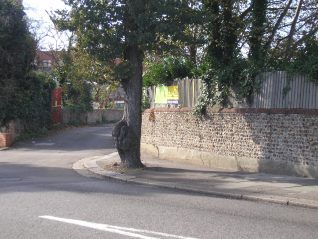 As can be seen from the merged photo, although the bomb damage appears to be in Stapley Road, this is now proved to be incorrect.  The photo was originally published in the Brighton Gazette booklet “Brighton and Hove Under Fire” in 1946.  My investigation, and article about Stapley Road had difficulty in identifying the exact spot where the photo was taken.  The only  area (in Stapley Road) that could have possibly matched the photo was the bottom left hand corner, where Stapley Court now stands.  However Alan Knight kindly pointed out that his booklet of “Brighton and Hove Under Fire” stated that the photo was showing Olive Road, just a short distance away!  He also lived in that area between 1934 – 1958, and his recollection was that it was Olive Road!

The Mystery Solved
Following Alan’s comments I felt that a visit to the suggested site was required.  As can be seen from my merged photos, there is no doubt, Alan is correct, it is Olive Road.  The two photos match, with the exception of the changes that 60 plus years between them brings!  Seemingly there must have been more than one edition of “Brighton and Hove Under Fire”, and Alan’s edition had the incorrect caption corrected.

Brighton Bombing Map
As an additional check, by examining the Brighton Bombing Map, it’s clear that a number of bombs did fall on the north end of Olive Road, and adjacent Hove Cemetery.  Closer examination indicates that 4 bombs landed in the cemetery and 2 in the northeast corner of Olive Road and Isabel Crescent.  Probably the south coast railway line, or near-by CVA factory which was involved in war work, was the intended target!

More about Olive Road
By looking at the old Ordnance Survey map (1914-1916  3rd revision), it shows that prior to the development of Olive Road, the track that led from the Old Shoreham Road, down to Portland Road, was far more dog-legged than now.  The old Ordnance Survey map shows that heading south, immediately over the railway bridge, the track turned sharply west.  The original track didn’t join Portland Road as Olive Road now does, but headed at an angle almost parallel to the railway line.  Remnants of the flint wall that bounded the track can still be seen now.  It was in this area, during the First World War, plans for factory buildings and a munitions shop were approved by Hove Council.  These were for Messrs. C. A. Vandervell of Acton London, who were connected to the electrical company Lucas.  Following the war the name became CAV and around 1934 it became CVA.  Although by 1946 Olive Road had been straightened, the original track can still be identified on the old Brighton Bombing Map.

Mr Hallyburton
Another story that I heard about this area is that it was built in the late 1920’s by a Mr Hallyburton,  hence Hallyburton Road.  He named the 6 surrounding roads after his daughters, Olive (Road), Isabel (Crescent), Florence (Avenue), Margery (Road), Dorothy (Road), Gladys (Road).  An excellent story, I hope its true!