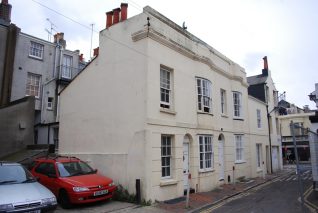 m) REGENCY MEWS: Lying behind the grand facade of Regency Square, this mews is now approached only from Preston Street, although access was also via the listed archway between nos.42 and 43 Regency Square. The attractive nos.10-11 are small, bow-fronted listed houses of about 1835.