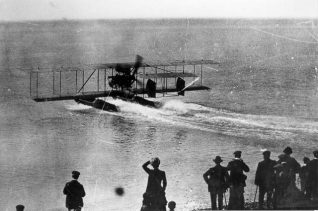 zoom
Gordon England's "Radley-England" Amphibian, May 1913; an early seaplane taking off from Kemp Town Beach, with spectators at the water's edge.
Image reproduced with kind permission from Brighton and Hove in Pictures by Brighton and Hove City Council 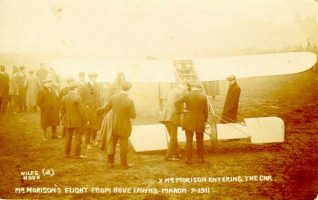 zoom
Mr Oscar Morison's Flight from Hove Lawns, March 7 1911: Earlier On 15 February he had flown a Bleriot monoplane from Brooklands Aerodrome near Weybridge to Brighton in one hour, landing by mistake near the Banjo Groyne.
Image reproduced with kind permission from Brighton and Hove in Pictures by Brighton and Hove City Council

Please note that this text is an extract from a reference work written in 1990.  As a result, some of the content may not reflect recent

The first aeroplane seen in the skies above Brighton was a Blériot monoplane which was reconstructed on the beach at Black Rock by Andre Beaumont, a French pioneer who had sailed over from France. With Harry Preston as his passenger, Beaumont flew low over the town and sea for forty-five minutes in 1910. On 15 February 1911 Oscar Morrison flew another Blériot monoplane from Brooklands Aerodrome near Weybridge to Brighton in one hour, landing by mistake on the beach near the Banjo Groyne; the propeller was hung as a souvenir by Harry Preston in the Royal York Hotel for many years. The Preston brothers, together with Mr Rosenthal of the Palace Pier Company, presented an £80 prize for a ‘Grand Aerial Race’ from Brooklands to Brighton on 6 May 1911, won on handicap by Gustav Hamel in a Blériot monoplane. Another race was flown from London to Brighton in 1913. {19,290}
As a result of these pioneering flights a permanent sea-plane station was opened in 1913 by Magnus Volk’s son Herman at the Banjo Groyne, using the electric railway as the principal means of access. The venture was short-lived, however, as the small hangar was requisitioned for the war effort in 1914. A plan for a sea-plane station in front of the Kemp Town Slopes was approved by the council in 1928 but was vetoed by the Board of Trade. {189}
Meanwhile, a pioneering centre of aviation was becoming established some 6.5 miles to the west of Brighton in the parish of Lancing. The first flight was made on 10 July 1910, and the Shoreham flying ground was officially opened as Brighton Aerodrome on 20 June 1911. During the First World War the land was requisitioned by the Royal Flying Corps and after 1918 the land was returned to grazing, but the airport started again in the early 1930s with the first scheduled passenger flight made in October 1932. Services to the Isle of Wight, Croydon, Deauville and Jersey were established, and on 13 June 1936 the airfield was officially reopened as the Brighton, Hove and Worthing Municipal Airport, under the joint control of the three boroughs; a railway station also opened adjacently. The Art Deco terminal building, designed by Stavers H.Tiltman, is now listed and is often seen in television productions depicting the 1930s. The following year 6,000 passengers used the airport, but it was again requisitioned as a fighter base in the Second World War. Municipal control was re-established in 1951, but the whole airport was leased to F.G.Miles Ltd and the Beagle Aircraft Co. until 1971, with just a few scheduled flights made in the 1950s. Shoreham Airport reopened as a municipal airport in May 1971 and a 900-yard hard runway opened on 1 July 1982; this is too short for all but the smallest passenger aircraft, however. Scheduled flights to Jersey and France were resumed for a short period, but Shoreham, one of the six oldest licensed aerodromes in the country, remains the earliest still operating.

The following resource(s) is quoted as a general source for the information above: 123,292