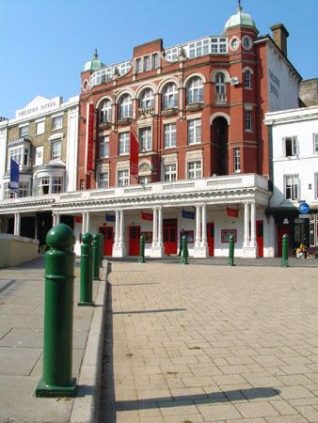 a) ESTABLISHMENT: The town’s principal theatre was built for Mr Hewitt Cobb at a cost of £12,000 to replace his Duke Street theatre. The foundation stone was laid on 24 September 1806 by the manager, John Brunton, and the classical building, with its three-storey facade and Doric colonnade, opened on 6 June 1807 simply as the ‘new theatre’. An audience of about 1,200 could be accommodated in the highly decorated interior, which had two tiers of boxes, and the first of many quality productions they saw were Hamlet and The Weather-Cock, with the celebrated Mr and Mrs Charles Kemble in the leading roles. Gas-lighting was installed in 1819.

The following resource(s) is quoted as a general source for the information above: 123,235