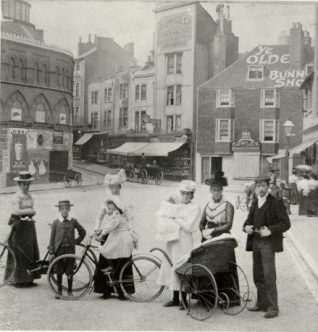 zoom
Group of men, women and children with bicycles in Pool Valley. 18th Century Bun Shop and clock factory in the background.
Image reproduced with kind permission from Brighton and Hove in Pictures by Brighton and Hove City Council

Brighton’s ‘lost river’ was an intermittent stream known as the ‘Wellesbourne’ that ran from Patcham and beyond to the sea at Pool Valley , but only at those times after prolonged rainfall when the water-table within the porous chalk bedrock reached the surface along the London Road valley and water from springs was thus able to flow without repercolating, a  phenomenon similar to the Winterbourne at Lewes today.
One of its principal sources was the pond in front of All Saint’s Church, Patcham , now marked by a slight depression. In most winters the pond overflowed and water ran to the bottom of Church Hill (then named Spring Street) where it would be joined by water from other springs in the valley as far as Pyecombe; these included one at Brapool, which means ‘pool by which bracken grew’. The stream then flowed into another pond at the corner of Old London Road and Ladies Mile Road , and along the road to Brighton where it was joined at the Level by another winter-bourne from Falmer that ran down the Lewes Road valley. The stream finally debouched into the sea at the ‘pool’ of Pool Valley , or perhaps slightly to the east, diverted by an artificial bank to protect the inlet {10}. The Domesday Book records the presence of a mill at Preston in 1086, possibly a water-mill powered by the stream.
The bourne often flooded the Valley Gardens in the winter and skating was occasionally possible on the frozen Steine . The swampy nature of the central valley probably prevented development upon it, but once the Steine had become a fashionable promenade with the arrival of visitors from the mid eighteenth century, such conditions were unacceptable. In 1792-3 the Prince of Wales and the Duke of Marlborough, at their own expense, laid a wooden sewer under the western edge of the Steine to carry the bourne to the sea which also drained a stagnant pool that collected in front of the Prince’s Marine Pavilion ; the Wellesbourne was culverted and Pool Valley was also bricked over. Following inundations in the winter of 1827-8, another drain was laid all the way from Preston Circus to the Albion Hotel.
Particularly strong flows of the Wellesbourne occurred in 1795, 1806, 1811, 1827-8, 1852, and finally in 1876 when both Lewes and  London Road were impassable, but since the construction of the Patcham Waterworks in 1889, and the consequent siphoning of water from its sources, the bourne has never flowed again. The Wellesbourne, corrupted to ‘Whalesbone’, may have given its name to the hundred through which it flowed, but although often referred to as an ‘underground river’, it is only so in the sense that spring water from Patcham may be carried under the  London Road by sewer; there is no stream flowing within the chalk or Coombe deposits of the valley. After very heavy rain the water-table rises and reaches the surface in basements along the valley and occasionally at Preston Park and the Valley Gardens , giving the impression of an invisible stream. The Parks and Recreation Department uses water from the chalk along the valley for watering its gardens.