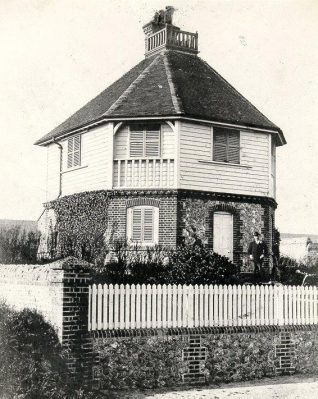 zoom
Sewerage Ventilation Shaft Cover, c. 1930: Octagonal sewerage ventilation shaft cover at Rottingdean with interesting brick and woodwork. This "false house" was built in 1890 and stood on the coast road between Rottingdean and Saltdean. It has since been demolished.
Image reproduced with kind permission from Brighton and Hove in Pictures by Brighton and Hove City Council 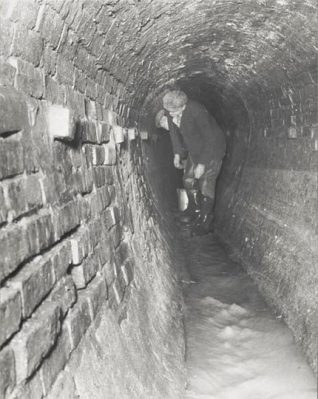 zoom
This is a photographic print of Marine Parade Sewer, Brighton. It is a view of the inside of the narrow tunnel, taken at a point east of the junction with the Old Steine. Two workmen can be seen inspecting the brickwork. This photograph was commissioned by the Borough Surveyor's department. A note accompanying the photograph states that the 'defective brickwork was replaced, the whole repointed and rendered to the shoulders'.
Reproduced courtesy of Royal Pavilion & Museums, Brighton & Hove

a) EARLY DRAINS: Until the early nineteenth century, human waste in Brighton was either tipped into cesspits or, in the poorer areas, straight into the roadway; the few sewers that then existed were used only to drain surface rainwater. In 1792-3 a sewer was constructed to drain the Steine and carry the intermittent Wellesbourne stream to the sea, and following the inundations of the winter of 1827-8 a northern storm-water drain was laid from Preston Circus to the sea-front. Some developers did incorporate drains in new streets from the turn of the nineteenth century, but they were only intended for surface water as their use for removing foul water was prohibited under the Brighton Town Acts. The use of cesspits, regularly emptied at night by scavengers employed by the town, was preferred, although many people were in fact using the inadequate drains for sewerage.

b) CRITICAL REPORTS: The state of the town’s sewerage was obviously a cause for great concern, especially in so fashionable a resort. In 1848 Dr William Kebbell reported on the conditions in the town, finding, among many other damning comments, that the King’s Road drain was producing bad smells and that the Edward Street drain ran above basement level. In April 1849 the General Board of Health’s inspector, Edward Cresy, made a detailed report on the town’s sanitation with regard to the adoption of the Public Health Act {284}. He was alarmed to find several thousand cesspits cut into the porous chalk, many of them near drinking water wells, and only 32 of the 186 streets sewered. He consequently made many important recommendations to remedy the situation.
The main rainwater drain ran along the sea-front and discharged at short outfalls onto the beaches at Hove, Western Street and below the Royal Albion Hotel; the illegal use of the drains for foul waste created a considerable problem at these outfalls, however. In May 1852 the sewer was continued under Marine Parade to connect with the Kemp Town sewer, and was further extended to an outfall at the parish boundary at Black Rock in 1854. Another damning inquiry and report in 1859, when only about 4,000 houses were connected to the system and an estimated 10,000 houses retained cesspits, resulted in a scheme to drain the town into three extended outfalls at Western Street, the Albion Hotel and Black Rock in an effort to reduce the smell and effluent along the beaches; the Lewes Road sewer was also enlarged in 1866 to cope with springs along the route. The scheme was successful in reducing most of the problems on the beaches but was still far from satisfactory as patches of floating sewage could be seen on the surface and substances were sometimes washed ashore. Public agitation resulted in an examination of schemes for a new method of sewage disposal.