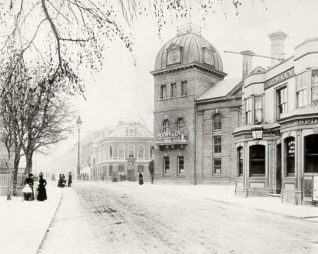 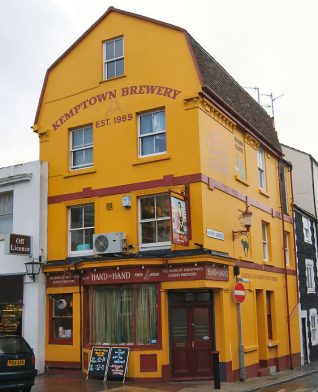 The apparently insatiable thirst for beer and the large number of public houses and beer-houses opening in the nineteenth and early twentieth centuries led to the establishment of many breweries in the town. Some of the better known breweries are detailed below.

a) ALBION BREWERY, Albion Street: Acquired by the Phoenix Brewery in 1892, it was used only as a store from 1924 and then as a builder’s yard until demolished in the 1970s. The site is now occupied by the Elim Church. The adjacent Stable public house is named from the brewery’s stable that stood opposite.

b) AMBER ALE BREWERY, Preston Circus: Once dominating Preston Circus with a very large clock tower and a domed roof, it was probably established in the 1820s by Smithers. The brewery was later acquired by Longhursts but was demolished in 1901 to allow tram lines to be laid on a curve between Beaconsfield Road and Viaduct Road. Part of the building was adapted as a fire station, since rebuilt, but the malting was incorporated into the Duke of York’s Cinema and may still be seen behind the present fire station.

d) CANNON BREWERY, Russell Street: Established in the early nineteenth century by a Mr Barnett, it was acquired by Tamplins in 1926 but was demolished in 1969 for the extension of Churchill Square. It was latterly used as a bottling plant only.

e) KEMP TOWN BREWERY, Seymour Street: Founded by William Hallett as the Bristol Brewery in about the 1840s, it was later taken over by the Abbey family and became the Kemp Town Brewery in 1933. In 1963 it was taken over by Charringtons, but brewing ceased in April 1964 and it became empty in 1966. The main buildings were sold in January 1970 for the development of Seymour Square. There was also a malting at the corner of Eastern Road and Sutherland Road, a site now used by Brighton College. In 1989 a new Kemp Town Brewery opened at the Hand in Hand public house in Upper St James’s Street.

f) NORTH STREET BREWERY: Established in the first half of the nineteenth century by William Smithers. When Imperial Arcade was built on the site in 1923 the brewery continued trading from premises in Regent Hill until it was acquired by Tamplins in 1929. A malt-house belonging to this brewery remains on the southern side of Blenheim Place.

g) PHOENIX BREWERY, Albion Street: Built in 1821 to replace Richard Tamplin’s Southwick Brewery following its destruction by fire in August 1820, the brewery thus rising up from the ashes like the fabulous Arabian phoenix. Part of the Watney empire since 1953, it occupies a large site behind Richmond Terrace. One old, flint malting remains in Southover Street, while the decorated former brewery office of 1893 stands in Phoenix Place near the brewery’s own public house, the Free Butts. The surrounding roads also retain their original setts. Since 1973 it has been used as a bottling plant and depot only, the beer being brought in from the Watney brewery at Mortlake, but the whole site is scheduled for closure in early 1991 as the distribution depot moves to Lewes. A 1990 plan for the redevelopment of the site with offices and housing also involves the demolition of Wellesley House in Waterloo Place, but retains the Free Butts and the 1893 offices.

j) ROCK BREWERY, St James’s Street: Stood at the corner of Mount Street with premises also in Warwick Street and St Mary’s Place. It was established in about 1809 and continued brewing until about 1928.

k) WEST STREET BREWERY: Dating from at least the mid eighteenth century, it became the first Brighton brewery to employ steam in about 1800. In 1824 it was taken over by Vallance and Son, and later became Vallance and Catt’s brewery. Standing behind the King’s Head near the south-western corner of West Street, it was taken over by Smithers in 1913 but was closed by Tamplins in 1929.

Any numerical cross-references in the text above refer to resources in the Sources and Bibliography section of the Encyclopaedia of Brighton by Tim Carder.
The following resource(s) is quoted as a general source for the information above: {83,123,275}

Update on the above text

g) Phoenix Brewery
From 1973 it was used as a bottling plant and depot only, the beer being brought in from the Watney brewery at Mortlake, but the whole site was closed in 1991 as the distribution depot moved to Lewes. A 1990 plan for the redevelopment of the site with offices and housing which followed did involve the demolition of Wellesley House in Waterloo Place, but this latter did not occur. The site retains the Free Butts public house and the 1893 offices.