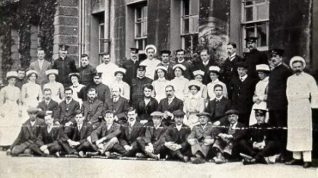 a) HISTORY: In contrast to many other seaside towns, Brighton has always had more than its fair share of poverty. The parish as a whole claimed relief from taxation in 1341 on the grounds of poverty, and in 1580 the town was said to be burdened with ‘the multitude of poor people, which daily are thought to increase’ {273}. The first Poor Law Act was passed in 1563. requiring two officers in each parish to collect a poor rate for the relief of poverty, and by 1690 a tenement in East Street was being used as a poorhouse. The ‘deserving poor’, i.e. those paupers who came from the parish, were cared for in the workhouses and given useful work to do such as net-making and oakum (old rope) picking. The ‘outdoor poor’ remained in their own homes, but were given a weekly allowance, either in money or in kind in the form of clothes, coal, etc. Recipients of parish relief were made to wear the town badge, however. In 1690 the Lewes Justices made a rate in the neighbouring parishes for the relief of poverty in Brighton which, in 1708, was extended throughout the whole of eastern Sussex. By the mid eighteenth century only 115 out of 450 rateable properties in Brighton were not exempt from the poor rate.

Until 1810 the poor law was administered by the parish in the form of the overseers, but the Brighton Town Act of that year transferred control to thirty ‘Directors and Guardians of the Poor’, nominated annually by the town commissioners. One of their first actions was to ‘improve’ the workhouse diet in the interests of economy. The 1825 Brighton Town Act gave the election of guardians to the parish ratepayers, but the 1834 Poor Law Amendment Act reorganised the whole system of relief. Outdoor relief was abolished, and in order to obtain allowances people were forced to enter the workhouse where conditions were deliberately made harsh to discourage all but the totally destitute; the Act therefore had the desired effect of reducing the numbers claiming relief. Most parishes were amalgamated into larger unions ( Patcham and Preston into Steyning Union; Falmer , Ovingdean , Rottingdean and Stanmer into Newhaven Union), but Brighton remained a separate union on its own. In 1862 the guardians opened an industrial school at Warren Farm, Woodingdean , for poor boys and girls whom it was not considered desirable to keep with adults at the workhouse.

On 18 March 1871 the Brighton Directors and Guardians were replaced by a ‘Board of Guardians of the Poor’, responsible to the Local Government Board (replaced in 1919 by the Ministry of Health) and continuing to administer the workhouse. Some allowances such as old-age pensions and limited unemployment benefit were introduced nationally in the 1900s and ’10s, but the workhouse system remained in operation until 1 April 1930 when the local board of guardians was replaced by the county borough council’s public assistance committee under the 1929 Local Government Act. In 1934 a national Unemployment Assistance Board was established, and in 1940 a general Assistance Board was created to cater for other types of relief. The years following the Second World War saw further increases in benefits with the replacement of the poor-law system by the ‘Welfare State’ on the so-called ‘Appointed Day’, 5 July 1948. In 1966 the National Assistance Board and National Insurance combined to form the Ministry of Social Security, now the D.S.S., while East Sussex County Council took over responsibility for social services from the county borough council on 1 April 1974.