You are here: HomenextTopicsnextViews of the city: images & opinionsnextSights, smells and sounds of the citynextTrip down memory lane

My own earliest memories of Brighton sights and sounds are rather vague with time. So whilst I’m too young to remember the clatter of Brighton trams on rails, the ring of the circular handbell or the flashing sparks burning on the overhead wire, I do recall the droning as bombers flew overhead and either being told to watch and have a feeling of elation, or being flattened into the smallest of targets against the rough flints of the station perimeter wall.

A smelly hairdressing salon
In later years I became more aware that that wall with its broken glass cemented into the top, led to Trafalgar Street and past the almost choking and rather unpleasant aroma from a tiny hairdressing salon in the station underpass. From the roof above came regular heavy rumbles as though there were trains actually passing overhead. But these just turned out to be taxis and three wheeled railway delivery trucks dashing into or out of the station during their daily routine. 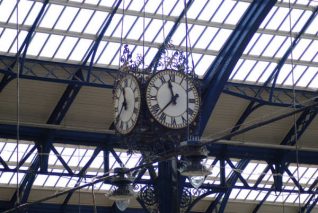 The station underpass
Those who were brave enough to take the underpass entrance to the station, were then greeted by the strong stench of stale urine from the male toilets at the bottom of the stairs. But having mounted them, the atmosphere, some would say the romance of a railway station, took hold.  Trains smoked and let off jets of steam, the guard’s whistles blew, taxis hooted and klaxoned, and porters rattled steel wheeled trolleys from platform to platform.  If raining, the immense glass roof supported by iron girders would echo like a drum, and quite often, tucked just inside in a dry spot would be an elderly harpist and violinist, playing more for themselves than others. 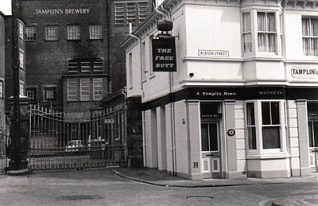 Allen West’s wailing siren
Looking back I can even recall the night time shunting echoing across the valley from a one sided tunnel beneath the station  All night long the wagons would be allowed to run down a slight incline with the squeaking of wheels reflecting their gaining momentum, until finally there was a resounding crash as buffer met buffer.  In the morning the wailing siren from Allen West’s factory in Lewes Road signal time for work, or if you heard it twice, you had overslept.  Daily smells like the one from Tamplins brewery, the coffee roaster in Western Road or freshly mown grass on the school playing fields, I found rather pleasant, But there were others like the fish alley in the open market that were not to my liking. 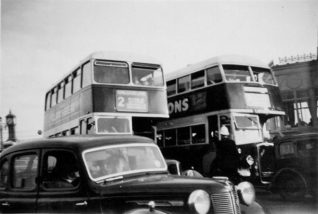 New fangled bus ticket apparatus
At weekends I would often take the bus into town with the conductor ringing the bell one or twice to tell the driver to stop or go.  Quite frequently when he was on the upper deck, instead of doing either, he would stamp his feet over the drivers head to give him the same signal.  I watched with fascination on the day that the conductor stopped using a wooden clip board with tickets and bell ringing punch machine. He moved on to a drum like apparatus that he set the fare on, before winding a handle and it whirred away, dispensing a ticket off a continuous length of paper tape.

Yelling or street calling
Often when I fished from the pier, the Waverly would come in to the lower landing stage noisily thrashing its paddle wheels as it pulled alongside.  A man would bellow, “Move yer B—– lines,” and there was an hour so’s fishing in that location down the drain.  Brighton was full of people yelling or street calling.  The winkle seller, French onion man, the knife grinder with his pedal driven grind stone, and of course, the rag & bone man with his cart and horse.  Thinking of smells, there was many a bucket I filled by following the latter around.

Sights, smells and sounds of the city (2)