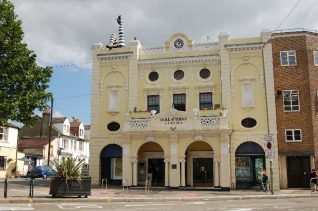 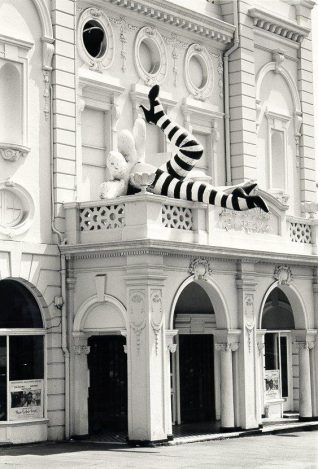 Formally opened by the mayor, Charles Thomas-Stanford, on 22 September 1910, the ‘Duke’s’ was built on part of the site of the Amber Ale Brewery for Mrs Violet Melnotte-Wyatt, the lessor and later manager of the Duke of York’s Theatre in London. Designed by theatre architect C.E.Clayton, the new cinema seated 800 and was considered very luxurious with Wilton carpets, tip-up seats, electric fans and an electric projector. Sound equipment was installed in May 1930, and the whole building was redecorated in June 1937. Following a brief period of wrestling bouts and bingo in the 1970s, the Duke’s took over the mantle of the Brighton Film Theatre in 1979 by presenting a varied programme of ‘art’ and ‘cult’ films. The building itself, one of the oldest purpose-built cinemas in the country, retains a largely unaltered, decorated facade in Edwardian baroque style, but once had two small domes at the corners of the roof surmounted by flag poles. Behind the fire station the cinema may be seen to have incorporated part of the old brewery’s flint malting.

Any numerical cross-references in the text above refer to resources in the Sources and Bibliography section of the Encyclopaedia of Brighton by Tim Carder.
The following resource(s) is quoted as a general source for the information above: {68,68a,286}