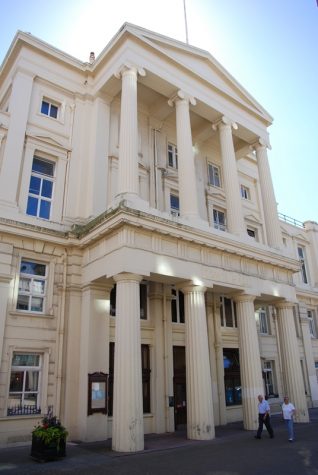 In the mid 60s, I worked, for a little while, at the Town Hall in Brighton. I was a junior clerk and put to work in the Registry department. This was a huge room, with rows of shelves right up to the ceiling. On the shelves were folders that covered just about everything to do with local government from as far back as anyone could remember. The function of a Registry is fairly obvious. Various workers, in various parts of the Town Hall and other areas, could call in for specific files and return them at a later date.

I presume that there was some sort of signing off process and that a number of the files contained classified information. There were many legal ‘bundles’ that contained huge numbers of pages. All this, of course, was before computers became ubiquitous and before even microfiche was in common use. One strange fact is that there was a huge computer, made by Cray, in the basement of the Town Hall and I never met anyone who knew what it was used for. As can be imagined, there were plenty of conspiracy theories about it.

Head of the Registry

The Registry was run by a mostly quiet but also a deeply sarcastic man who smoked his pipe without a break. I knew nothing about him and realise, now, that at that time, few ‘junior’ staff knew much about their seniors, and vice versa. I lived in awe and slight fear of the head of the Registry. But his very particular skill, was that he could indicate exactly where a file could be found. A solicitor might come in and say that he needed, for example, ‘the original papers for the development of a dentist’s rota system in the Hollingdean area, about 1947’. He would tell me, without missing a beat, that it could be found in ‘rack 22, series 43, file 2287’. It would take me a long time to find it, but I never knew him to be wrong.

I have often wondered how he did this. I can only imagine that he had a sort of library system, inside his head, just as libraries have sections on ‘Recent History’ or ‘Fine Art’ and those sections are divided by the Dewey decimal system of numbering. But, unlike the library system, files for a huge area such as Brighton and Hove and covering such a multitude of subjects, suggests that something else was happening. How he did it remains a mystery. I sometimes wondered what would happen if a file was put back in the wrong place. How would anyone find it? The head of the Registry probably would.

Were the ‘old days’ better?

It was impossible to know whether the head of the Registry enjoyed his work, nor did anyone know anything else about him. A frequent theme, on this site, is that the ‘old days’ were somehow ‘better’. That hasn’t been my experience. Today, people talk to each other, have friends at work and so on. People working at the Town Hall in the 1960s seemed to live very private lives and might have had things in common, if only they had talked to each other. Work life, today, in a city like Brighton and Hove, is pretty much immeasurably better than it was in the nineteen sixties. Glasses of the rose coloured type are easy to come by.