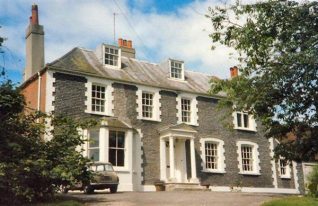 This beautiful Georgian residence is in private hands; it is listed Grade II (starred) and is the only starred building in Ovingdean. It has two storeys plus dormer floor and large cellar. It has red mathematical tiles on two sides and cobbles on the other two. Its porch has Doric columns and a pediment.

Origins
We know that a rectory existed on this site in 1445 and that the rectory of 1662 had ‘three hearths’. In 1780 the building was described as ‘a mean thatched Parsonage house’ and ‘only proper for a labouring Man’. In 1805 the then building was demolished and the present erected by the Revd John Marshall, the wealthy incumbent. It cost ‘upward of £2,000’ to build, a princely sum at that time.

The Revd John Marshall
In c1825 the Revd Marshall built Rectory Cottage for his son John who was also a clergyman and acted as his father’s curate. John Marshall senior died in 1835 and his son became Rector of Ovingdean serving until his untimely death by suicide in 1841. In 1949 the Rector, the Revd Alfred Stead, carried out further improvements which included the provision of a water closet. The last Rector to live in The Rectory was the Revd John B. Milne; it was sold when he left the parish in 1976.

Notice of an auction in 1841
On the death of the Revd J.W.H. Marshall in 1841, The Rectory was presented for sale. Shown below is the notice of the auction – it allows us a fascinating glimpse into the history of the building.

‘OVINGDEAN RECTORY THE MUCH ADMIRED RECTORY ON THE SUSSEX COAST NEAR BRIGHTON TO BE SOLD BY AUCTION BY MR. CREASY The Perpetual Advowson of, and next Presentation to, The Dishcharged Rectory of Ovindean, situate in the Archdeaconry of Lewes and Diocese of Chichester, and in the most beautiful and healthy part of the southern coast in the County of Sussex, about two miles from Brighton, subject to the life of the present incumbent, who is now in the 78th year.

It comprises an appropriate Rectory House, fitted with peculiar domestic comforts, approached by a carriage drive under an avenue of Limes, skirted by a quick hedge. In front of the residence is a Plantation and a Lawn on which is placed a Conservatory. It includes two Kitchens, detached Wash House or Brewery, all necessary Offices and Stores, capital Cellars, a Dining Room, Drawing Room and Study, has two staircases leading to seven Sleeping Chambers, and at a little distance a large room adapted to a Pupil Room or Library; a very productive walled Garden, a Kitchen Garden and a Grove intersected with Pleasure Walks, communicating with a Summer House on the summit, overlooking the Church, The Rectory, the Village, the Downs and on to the sea.

The Out-offices are a four stall Stable, Carriage House, and other appointments; also a Tithe Barn, which may now be pulled down. Near to the Rectory House is a Cottage Orné [a comfortable picturesque small country residence to distinguish it from a labourer’s cottage] built on the Glebe with appurtenances, designed for a Curate, which is abundant with comforts and has all Offices, Kitchen, Parlour, Drawing Room, two staircases.

The Church Yard adjoins and forms the perfect Estate, without intruding on any other property. Upwards of £2,000 were judiciously laid out on the buildings by the Father of the late Incumbent, and everything is in good order. The Tithes extend to over 1,643 acres of land, are commuted for the sum of £382 a year, payable by three persons. The Rates and Taxes amount to about £30 per year; Land Tax £8 per year.

The population of the parish, by the 1841 census, was 116. It is impossible for any Church Preferment on the Southern Coast to be more happily placed than this Rectory. It lies about a mile from the mighty Ocean, nestling in peace and quietude on the bosom of one of the Coombs of the Magnificent Downs, (between which the village is situated) and forcibly conveys to the mind feelings harrowed by the sacred duties to which it is devoted.

May be viewed by tickets only, on Mondays, Tuesdays, Wednesdays and Fridays, from two to five o’clock, which may be had of the Auctioneer, and full particulars to be had a the Auction Mart, London, of Mr. Lahee, New Bond Street, London, or of Messrs Freeman and Cornford, Solicitors, Ship Street, and of Mr. Creasy, North Street, Brighton.’

Notes on Revd Stead’s alterations 1887-89
The following is an extract from a notebook which belonged to the Revd Stead, it was written sometime between 1887 and 1889. The Revd Alfred Stead, M.A. was Rector of Ovingdean from 1844 until his death on the 5th of September 1889. This notebook was a very important document as it contained a great deal of information which allows us to date some of the work done in the restoration of the church:

‘On taking possession of the Rectory it was found very inconvenient in its internal arrangements. There was no soft water to be had, and every grate in the house smoked almost beyond endurance. This miserable state of things was cured by an intelligent workman from Palmer and Green’s of North Street, Brighton, but at considerable expense.

I have said that there was no soft water to be had on the premises. So the next thing to be done was to make a soft water tank in the kitchen yard, holding about 2300 gallons. At first the tank was filled from the Rectory House and premises only, but after Mr. Wood had made a trench round the Church, the water which ran from the roof of the Church was guided by earthenware pipes into the tank. The roof of the larger Rectory being what is called in some places a dish, or well roof, at a violent storm of rain or snow was apt to overflow, and thus the house was never safe from an inundation.

Being thus annoyed I decided to rearrange the interior of the Rectory House and to place a different roof on it. When this was decided a Mr. R. Hussey, an architect residing in London, was consulted and by clearing away a large kitchen chimney running through the centre of the building; making a brewhouse into a back kitchen, clearing away a second staircase, placing a new window in the drawing room, and a new roof, the house, almost on the same foundation was rendered in the year 1849, a comfortable residence for a moderately sized family, at an expense of £410.’