You are here: HomenextPlacesnextStreetsnextDevelopmentnextOld Town to North Laine 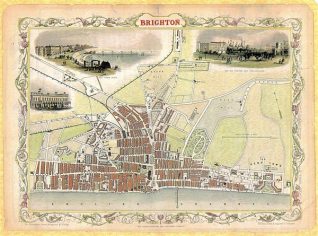 The following tables list the roads and streets of the borough of Brighton with the approximate dates of their first significant development. This information has been derived from contemporary plans and directories in periods of approximately five or ten years, and the town has been divided into convenient districts for ease of use. It should be noted that many roads, particularly in the Patcham , Rottingdean , Saltdean and Woodingdean areas, were developed piecemeal over many years, while other roads, mainly in the town centre, have been rebuilt since their initial development. Current road names are used in all cases, but streets no longer in existence are shown in italics. The reader is advised to use these tables in conjunction with a street-plan. {10,83,107,108,109}