You are here: HomenextPlacesnextStreetsnextHollingbury RoadnextSetting up Fiveways Artists' Open Houses 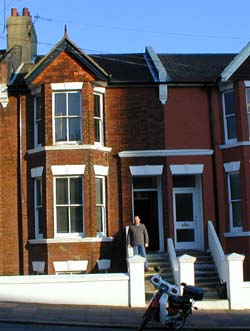 When I moved to this house in Brighton in 1980, I had plans to join in the Artist Open Studios that had been a feature of the Brighton Festival in the 1970s, only to find that they had discontinued. So I decided to go it alone and open all the rooms in my house during the 1982 Festival. I invited ten other artist friends to show with me.

The novelty of an artist opening his home to the public was soon picked up by the local papers, and the public loved it. They made comments like “it’s easier to relate to art when it’s shown in a domestic setting” or “I didn’t think artist lived like this”.