You are here: HomenextPlacesnextStreetsnextHollingbury RoadnextOne of the first of the 'Fiveways'

One of the first of the 'Fiveways' 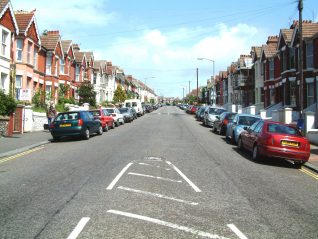 zoom
Hollingbury Road
From the private collection of Joy Whittam

The houses in Hollingbury Road, some three storeyed, were built from about 1886 and represent development over many decades. Given its close proximity to the Dust Destructor chimney burning the town’s household waste, the abattoir, and steam laundries this was probably not the most fashionable part of town! Many of its first residents had occupations which reflected the kind of local industries including a builder, green grocer, dairyman and several laundresses.

Grand Victorian occupants
Page’s Directory for 1887 lists just four ‘Villas’ in the road worthy of having a postal address, a Surgeon and a Count among the somewhat grander occupants. Curiously the census of 1891 reveals no record of Hollingbury Road, although the road itself and several properties appear on maps from the late 1890’s. The 1901 census shows an increase in households with house numbering now up to 41.

A resident in the first decades of the 1900’s recalled that the surface of Hollingbury Road was made up of rolled flint “spread over the chalk base with a mixture of marble, plenty of water and a heavy roller”. This type of road gave a good grip for horses’ hooves but needed to be damped down with sprayed water to reduce the dust during summer months. Horse drawn vehicles and bicycles were the heaviest traffic, allowing children the freedom of playing in the road.

A child’s view from the 1940’s
This lack of motor traffic lasted into more recent memory – a local resident Jane, whose family lived at 107 Hollingbury Road from 1942- 44, remembers as a small child being able to easily cross all the roads at the Fiveways junction. She did however get knocked down by a bicycle when running across the road to visit a friend at “Vine Cottage” a bungalow hidden behind Hollingbury Road – the friend’s garden providing the land which much later became Adams Close.

For some years Smiths Clocks had a factory occupying land on the west side of Hollingbury Road, (now the site of  Ditchling Gardens and Place). During the Second World War production expanded due to the demand for aircraft and marine instruments and Numbers 105 and 107 were commandeered as offices, with Jane’s family and the neighbours, having to move out.

Making clocks for Spitfires
Jane remembers the girls working in the factory “making clocks for Spitfires” waving to her and her brother. Living near a tall chimney like the Dust Destructor in war time was not without risk, as from the air its function might not have been apparent. One day at no.107, a young Jane thought she heard an aeroplane coming overhead  – “the plane was flying so low that when it dropped the bomb on the Dust Destructor it went in one side and out the other and so didn’t do any damage to the chimney!” Jane also recalls seeing a gun emplacement positioned on top of the Co-op building at Fiveways.

The beginnings of the Artists’ Open Houses
In 1980 Ned Hoskins, an artist, moved into no. 8 at the bottom end of the road at a time when “a lot of the houses were divided up into flats and many were in poor condition.” He restored his own property with the intention of opening the top floors of his house to show some of his paintings to the public. This was a great success and the following year he was joined by other artists showing their art works in his house. Gradually other artists opened up their own house and so began the Fiveways Open Houses now involving over 200 artists houses locally and a hugely popular part of the annual Brighton festival. Through this Ned has made many friends in the road and contributed an interesting chapter to the history of  Hollingbury Road.