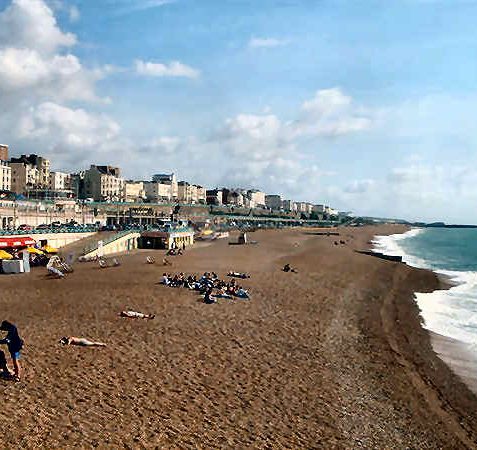 East Cliff viewed from the beach
Photo by Chris Webb 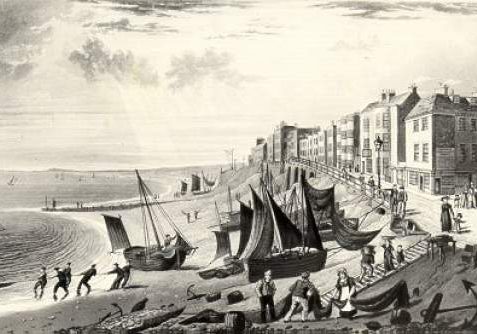 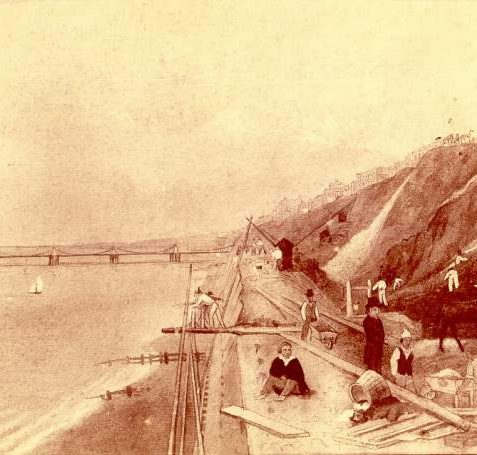 Construction of Esplanade at East Cliff, c. 1830-33: Brighton's East Cliff rises to about 80 feet above the sea at Eaton Place. In 1830 to 1833 a cement sea wall was built along the face of the East Cliff between Old Steine and Royal Crescent. A large amount of rubble was then tipped over the edge of the cliff top to further protect the wall. An esplanade, or carriage road, was then built on top of this sea wall.
Image reproduced with kind permission from Brighton and Hove in Pictures by Brighton and Hove City Council 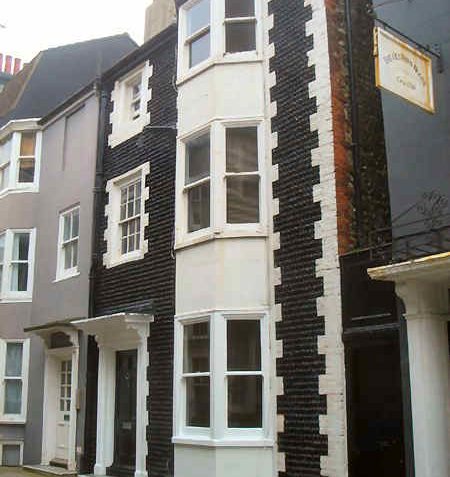 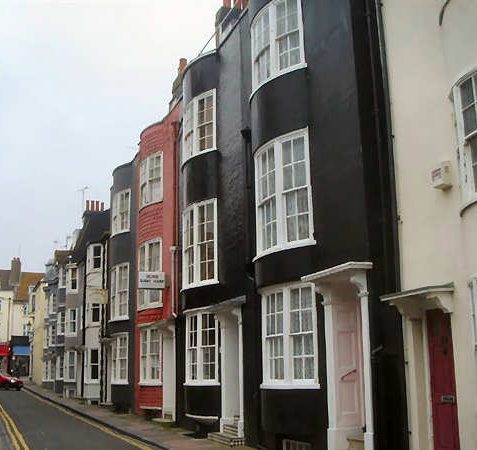 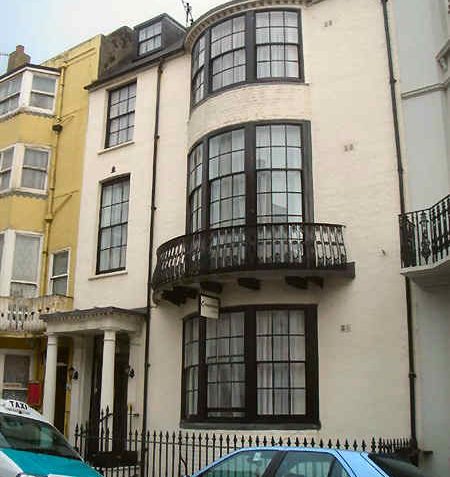 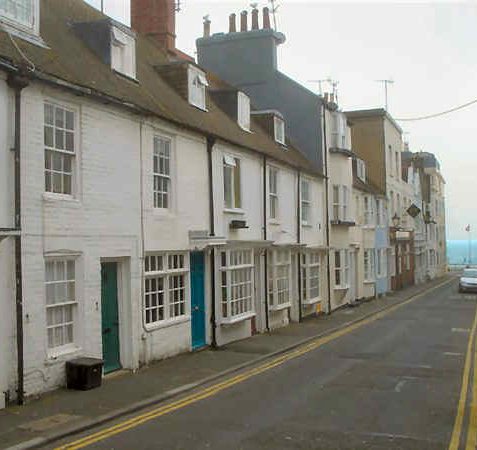 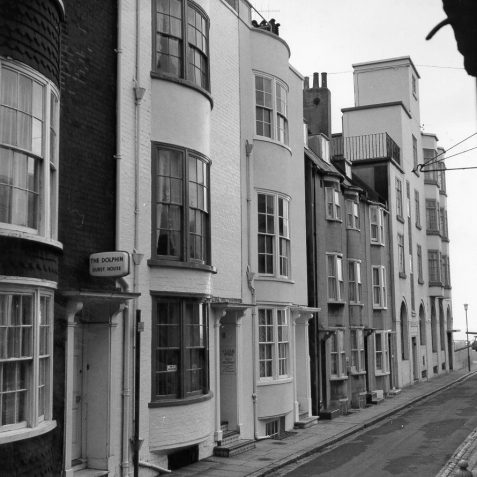 Brighton’s East Cliff rises to around eighty feet above the sea at Eaton Place on ‘Head’ or ‘Coombe’ deposits, an easily eroded chalk rubble mixed with clay and flints. Protected from the 1830s for the whole of its length by a massive sea-wall, the East Cliff presents, in its Marine Parade frontage, a sea-front facade unsurpassed anywhere in Britain. Since 1908 it has also been known as the King’s Cliff in honour of Edward VII (q.v.) who had associations with Kemp Town.
Developed from the 1780s until the 1870s, the East Cliff is now an outstanding conservation area and includes also the many roads leading northwards from Marine Parade, delightful streets lined with small-scale lodging houses, and middle-class and artisan housing. It also covers the small streets to the north of St James’s Street and the attractive Victorian terraces around College Place and Sudeley Place.
To make an exploration of the area easier, the streets of principal interest leading northwards from Marine Parade are detailed below in topographical order from the Steine eastwards, but see also “Bristol Road“, Marine Parade“, “St George’s Road” and St James’s Street

a) MANCHESTER STREET: The two listed buildings are no.9, the Star public house which has narrow bows and a good doorway, and no.10, the Golden Girl Restaurant, a three-storey, late-eighteenth-century building with a pair of bows and faced in mathematical tiles. No.17, included on the council’s local list, is also faced with mathematical tiles and has a bow. Dolphin Mews was completed in 1985 in Georgian style on the site of the Southdown Coach Station. {44}

b) CHARLES STREET: A delightful street of small, late-eighteenth-century cottages. Nos.9-12 are bow-fronted listed buildings, nos.10-11 being faced with mathematical tiles. Nos.20-23, which were saved by the Environment Minister after a public inquiry in December 1968 from demolition by Southdown Motors Ltd, are also faced with the distinctive black glazed tiles and are listed. No.8 has a cobbled facade. {44,123}

c) BROAD STREET: Developed in the 1790s by Thomas Howell with small lodging houses. Nos.4, 7, 9, 21, 23, 25 and 26, mostly with bows and fanlight doorways, are included on the council’s local list of buildings of special interest. No.14 is faced with black mathematical tiles. {14}

d) MADEIRA PLACE: A wide road of attractive, four-storey lodging houses developed from the late 1780s and known as German Place until 1914 after the proprietor’s nationality. No.18 is an early-nineteenth-century listed house with mathematical tiles and a bow, while nos.11, 13 and 14 are included on the council’s local list; all have narrow bows. Nos.20-23 were restored in 1985 as part of Olivier House. {14,48}