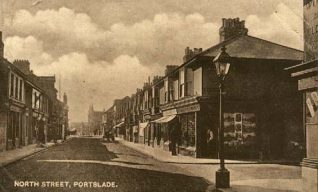 Sweets and the Salvation Army
53 North Street was a shop owned by my mother Mary Whittaker where she sold mostly tobacco and confectionery. Whilst my memory is less than impressive, I believe I can remember some of the people who lived in and around the street during the 1950s and 1960s. Our shop was two-thirds of the way down on the same side as the Salvation Army. I remember it well and particularly Mr Moon who I think led their band.

A Coronation invitation 1953
Next to us, at number 51, lived Mr and Mrs Imrie with their daughters Felicity and Vivien. They lived above the shop rented by Nora Robinson who sold material and cottons. At number 55 (down from our house) lived Mr and Mrs Judge who ran a carpet shop in the early 1950s. They closed down later in the ’50s and the building lay derelict for many years. I particularly remember them because they had a TV before almost anybody else. My first introduction to TV was on 2nd June 1953 when we were invited in to watch the Coronation. This was followed a week or so later by a street party to celebrate the event.

Remembering the neighbours
At number 57 lived Mr and Mrs Ware and their son Alan. They were fairly elderly in the early 1950s and ran a greengrocers but soon retired. I now get a little vague but I think that the next shop (59) sold cat and dog food for a while. When it closed the rest of the building was occupied by a Mrs Sweet with her sons John and David. Number 61 was a Post Office for a while run by Mr and Mrs Cable and assisted by their son, Jimmy. The corner shop was at some stage a cafe but I don’t know who owned it.
Moving down the road oppposite us lived two elderly ladies: Ethel Rippington and in the next house down, Violet Roelich. Next to them were the Stevens’ with their children Joan and Victor (my contemporaries). Two doors down were the Willards. They had 3 or 4 children. The only one I knew was Maurice. Then there were the Fords. Their daughter, Valerie, was also a contemporary.

The Crazy Gang
Opposite us were two shops which changed their use at different times but I can’t remember the details other than three uses: a bread shop (with lovely cakes); a shop which sold tools (owned by Mr Fuller who lived in Hangleton); and a bookmakers run by a Mr Dowsett. The particular memory of the bookmakers is that among their regular customers were the ‘Crazy Gang’ including Flanagan and Allen who used to come into my mum’s shop too.

Caught red handed!
On the corner opposite the Baptist Church (to which I was sent every Sunday morning despite protests) was the impressive house of an elderly lady, Mrs Baddeley. She had a small orchard which had delicious apples. One day, having been scrumping (a word you never seem to hear these days) I was caught climbing back over her wall by a policeman. He gave me a choice of a clip round the ear or telling my mum. I chose the ‘clip’ but he told my mum anyway!

Potted memories
The sack factory seemed to dominate North Street but I can vividly remember Goble’s (a brilliant greengrocers), the Home and Colonial Stores, and the butchers. Like others, I remember the cinema as being a flea pit.

The Clarence
My memory is that during my time there it was a good community, although there were one or two difficulties. The sailors (often Russian) called in at The Clarence (run by Bert Myers) when they were in Shoreham Harbour. They could be pretty noisy and I can vividly remember the sound of breaking glass when the pub closed.

Do you have memories of North Street?
I would be really interested to hear from anybody if I’ve struck a chord. I now live in Suffolk but have really fond memories of Portslade and always look out for the Albion (not the Seagulls) scores.