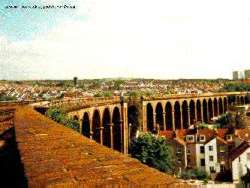 It’s the viaduct. It’s big, it’s made of bricks. It completely dwarfs the London Road area of Brighton as if one of its architects hamfistedly got the scale wrong. It isn’t, in all honesty, an especially beautiful construction.

I lived in a flat that was pretty much underneath it for three years, though. When you’re that close to something so imposing, it tends to enter your consciousness. Perhaps visitors found the rattling and rumbling and screeching of brakes as trains passed overhead somewhat distracting…but, for me, it had an oddly reassuring presence. It’s built to last, let’s face it.

I moved on when someone committed suicide by jumping off the viaduct, landing on our roof in the process. Still, even though I’m slightly further away now, its massive structure retains the same permanence and stoicism that I’ve grown to love. Years pass, buildings change, people come and go, trains trundle over, the viaduct remains completely indifferent to it all. It will always be so.