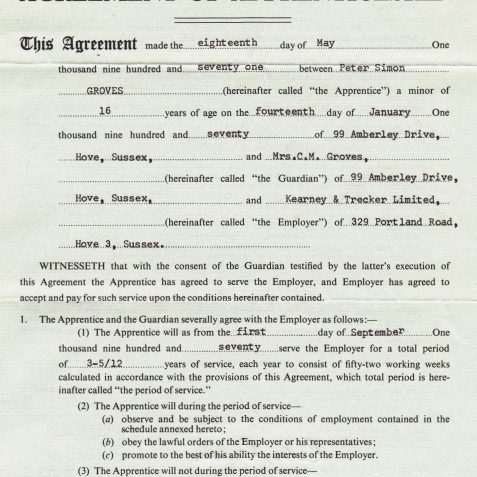 Agreement of Apprenticeship
From the private collection of Peter Groves 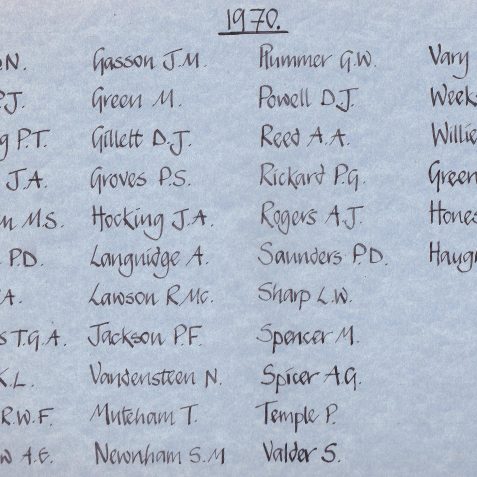 1970 K&T Apprentices
From the private collection of Gil Percy 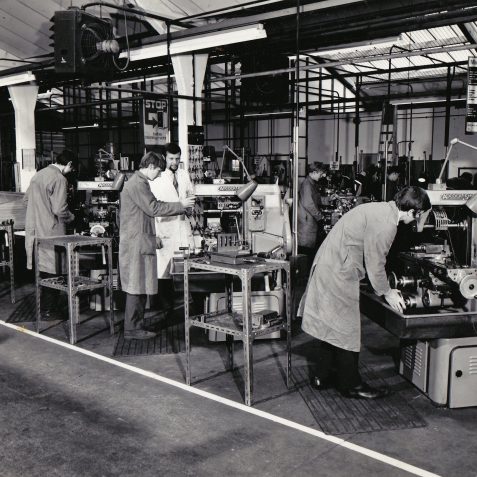 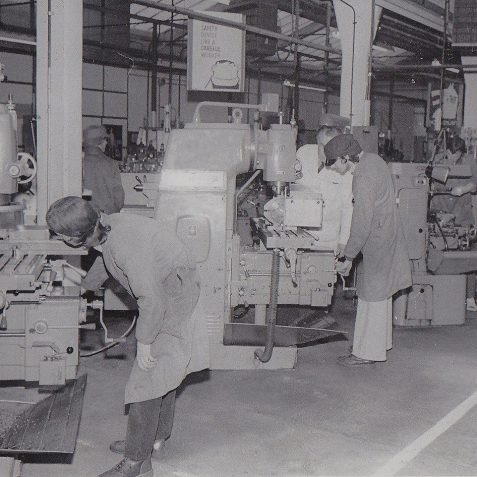 The School Road Engineering Training School was correctly identified by ex Kearney & Trecker apprentice Michael Brittain on the recent page “Mystery Photos of Brighton and Hove”, which you can find here. It was really well spotted by him after the passage of nearly 40 years, and good to then remember back to the 1970’s when the facility provided practical training for hundreds of local lads, in basic engineering skills.

Poor training had been identified as a cause of Britain’s tame post-war economic performance; this led the Conservative government to implement the 1964 Industrial Training Act.  The act had 3 objectives; to enable training to be better related to economic needs; to improve the quality of industrial training; and to spread the cost of training more fairly.

The facility in School Road was an annexe of Brighton Technical College.  Probably the School Road annexe came about due to the 1964 Industrial Training Act.  I’ve spoken to ex-apprentices who started in the late 1960s, and they recall that everything was brand new when they started; so it seem likely that it came about due to the 1964 legislation.  As a 1st year fully indentured Kearney & Trecker apprentice I started there in September 1970.

The facilities at School Road were excellent and included, sheet metal, machining, precision fitting, and electrical wiring. The practical training followed a City & Guilds syllabus, as did the theory at Preston Road, with both practical and written exams at the end of the first year.  It appears from my indenture agreement, dated May 1971, that perhaps the Company were hedging their bets, until I had passed the first year exams?  The length of apprenticeship was until the 20th birthday, in my case only 3 ½ years, although for some younger lads it would be more than 4 years.


Having started at School Road in September 1970, although £sd was the currency, decimal coins were being phased in.  From 1968 the shillings and florins were being replaced by new 5p and 10p coins, gradually others were phased in and the old phased out. I remember that Kearney & Trecker had a ’rounding’ system for pay; a 1st year apprentice received either £4 -14/- or £4 – 4/-, in cash, in a paper envelope.  The Portland Road factory was just along the road, and we would walk along from School Road every Thursday to collect our wages.

The working conditions for apprentices were superb, with new machines, a spotlessly clean shop floor; health and safety was of paramount importance, as was good housekeeping; everything had its place at the end of the day.  This, and the requirement for meticulous fine detail, rubbed off on me in every way.  A small canteen was provided, where tea and cheese rolls could be purchased, although the proprietor had to withstand mickey taking from the young lads.  We had just learnt to read the precision micrometer, and all agreed that he cut the cheese so thin, and then measured it with the micrometer to ensure it was thin enough to be tasteless. Unions, seemingly, played no part in the life of a 1st year apprentice, although in reality our structured wages were due to the Amalgamated Engineering Union.

After work, a few lads would sometimes go to the ABC Granada cinema, just down on the corner of Portland Road, Catch 22, Shaft, M*A*S*H, and Kelly’s Heroes were all the latest blockbuster movie releases I loved to watch.  With the matinee starting soon after lunch, but no set time for joining the continuous movie reel, it was possible to go in soon after our 5.30pm finish, and stay for the rest of the evening.

Thanks to the training I received, I’ve enjoyed steady employment in engineering for the past 40 years.  I’ve also been lucky enough to travel widely on company business. On a recent trip to the Far East, I boarded the Cathy Pacific 747 dreading the long uncomfortable 13-hour flight to Hong Kong.  I scanned through the in-flight movies, none of the new releases took my fancy. I flicked over to the classic library; ah, Get Carter, a 1971 classic.  I ordered a glass of red wine, got myself as comfortable as possible, and pressed the play button!