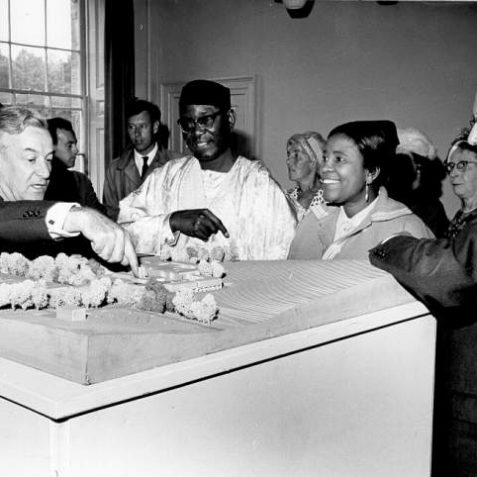 Model of Sussex University, c. 1960s: Governor General of Nigeria Dr Azikiwe and Mrs Azikiwe inspecting a scale model of the proposed University of Sussex at Stanmer House. On the left is John Fulton, Vice chancellor of the University from 1960-67. On the right is Alderman S. Caffyn.
Image reproduced with kind permission from Brighton and Hove in Pictures by Brighton and Hove City Council 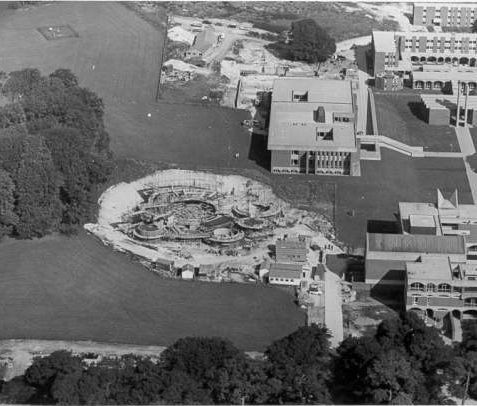 Aerial View of Sussex University campus, August 1968: This photograph shows the Gardner Arts Centre under construction. On the right, a path runs between Falmer House (lower right) and the Arts buildings (upper right), with a path leading left to the library.
Image reproduced with kind permission from Brighton and Hove in Pictures by Brighton and Hove City Council 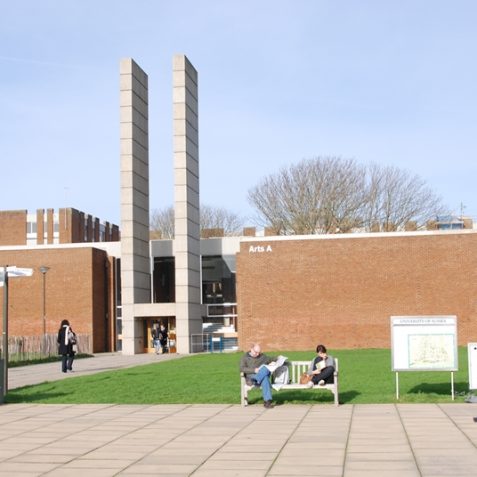 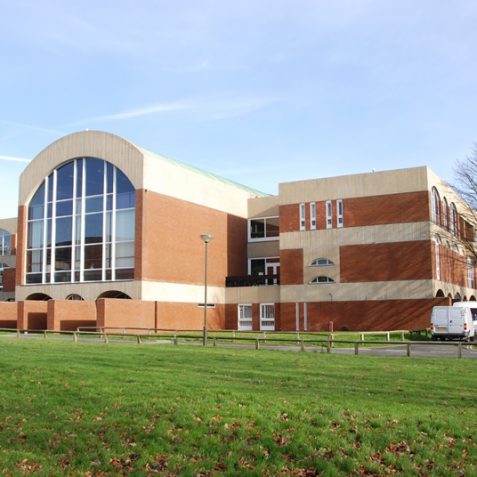 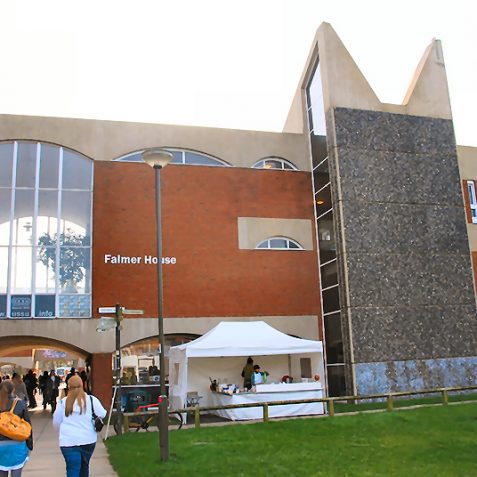 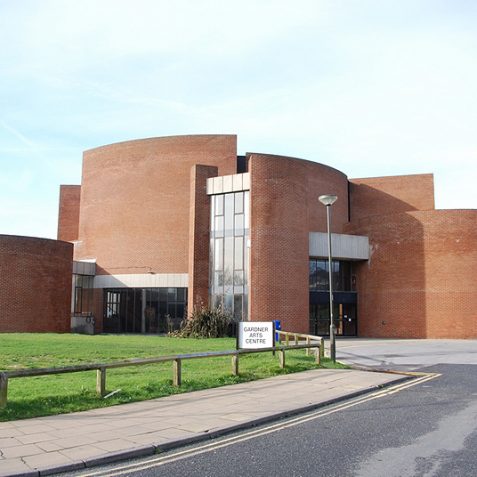 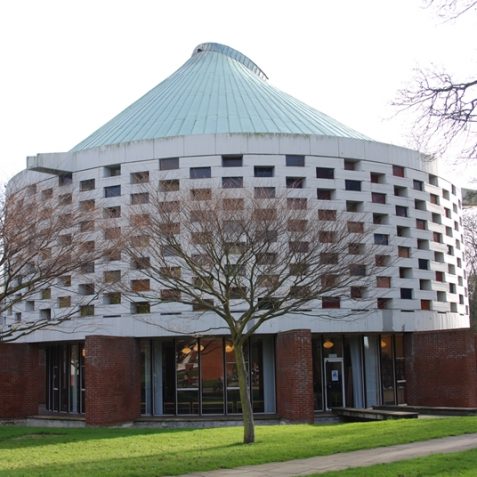 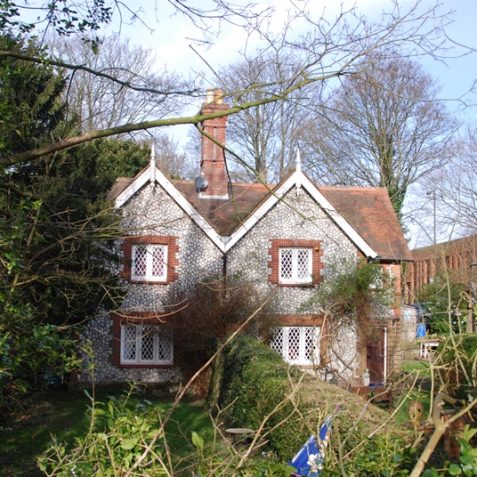 a) IDEA AND ESTABLISHMENT: In December 1911 a public meeting at the Royal Pavilion started a fund for the establishment of a university at Brighton, but the project was halted by the First World War and the money was used instead for books for the Municipal Technical College. However, the idea was revived in the 1950s, and in June 1958 the government approved the corporation’s scheme for a university at Brighton, the first of a new generation of ‘red-brick’ universities. {3}

The University College of Sussex was established as a company in May 1959, and a royal charter granted on 16 August 1961 raised it to full university status, with Viscount Monckton installed as the first chancellor. The first fifty-two students were accepted in October 1961 and were temporarily accommodated at 235-237 Preston Road, with lectures given in the nearby Knoyle Hall.

b) DEVELOPMENT OF THE NEW CAMPUS: In the meantime a new rural campus designed in typical 1960s-style by Sir Basil Spence was under construction on part of the corporation’s Stanmer estate known as the Tenant Lain; the Meeting House was opened in October 1966 on the site of Tenantlain Barn, but Tenant Lain Cottages still stand by the university approach road. Falmer House, the administrative, social, and student recreational block, opened in October 1962 around a central quadrangle, a reminder of more ancient universities. It was followed in 1963 by the Physics, Arts, and Library buildings, while the residential village, Park House, was completed in 1964. Biology, Chemistry, and Applied Sciences buildings, along with Essex House and Lancaster House, were opened by 1967, but much more development occurred during the 1970s and the campus now covers an area of some 160 acres. On 13 November 1964 the new campus was visited by Queen Elizabeth II.

The Gardner Centre for the Arts was financed by the Gulbenkian Foundation and Dr Lytton Gardner, who unfortunately died before the building was completed in November 1969. The interior has a circular auditorium seating 475, with smaller units housing a foyer, studios and workshops.

c) EDUCATIONAL AND CULTURAL DEVELOPMENT: The new university quickly developed a reputation for radicalism and liberalism amongst its student population, but its reputation for academic excellence, research and community involvement has grown enormously since the early days. Starting in 1961-2 with just 52 students, and with 400 on-campus undergraduates the following year, the university’s student population expanded rapidly to about 1,500 in 1964-5 and to 3,200 in 1967-8. The increase then slowed down until there were nearly 4,200 students in 1975-6, and it reached its present size of approximately 4,800 students and 1,750 staff in 1980-1.

A student radio station, Radio Falmer, covers the campus on a frequency of 999 kHz from an inductive loop aerial around the perimeter. It is specially licensed by the Department of Trade and Industry and has been operating since February 1976.

The following resource(s) is quoted as a general source for the information above: 241