You are here: HomenextPlacesnextEntertainmentnextDome and Corn ExchangenextBuildings with Royal connections 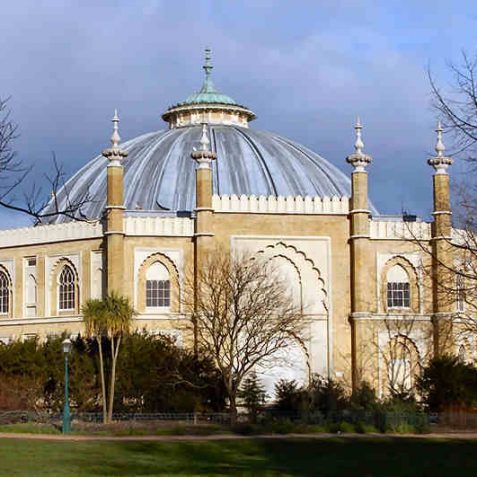 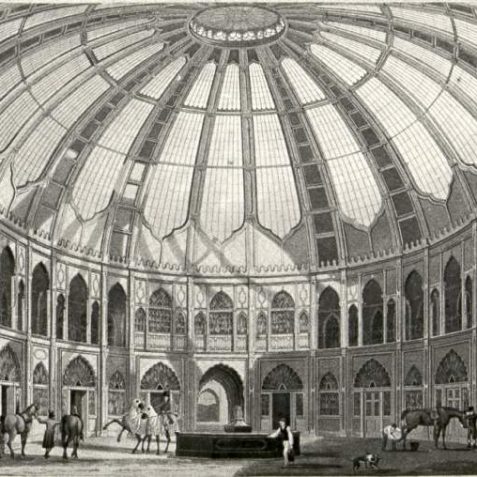 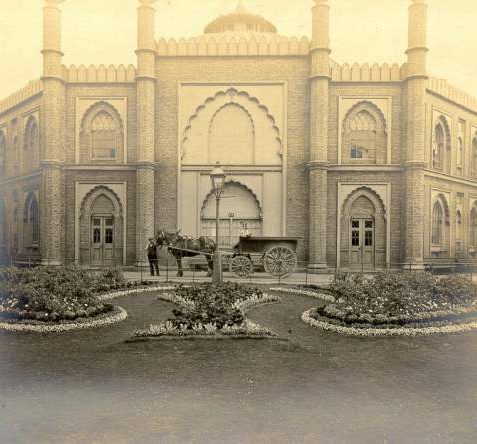 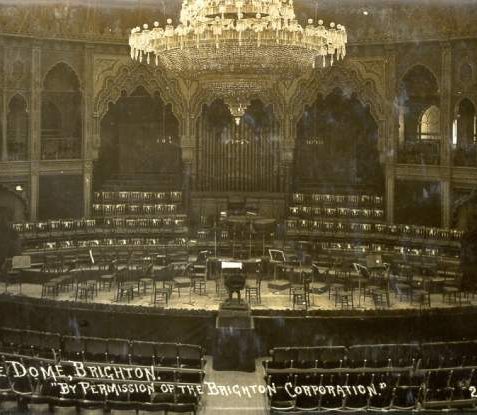 Auditorium of the Dome, c. 1910: After conversion to the Moorish designs of the Borough Surveyor Philip Lockwood, the Dome reopened on 24 June 1867 as a concert hall seating 2,500 people with a gas chandelier measuring 30 feet high and 16 feet across. This photograph was taken prior to the 1934-5 refurbishment.
Image reproduced with kind permission from Brighton and Hove in Pictures by Brighton and Hove City Council 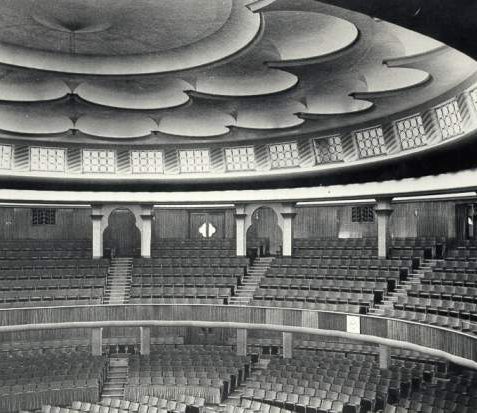 Interior of the Dome, c. 1935: In 1934-5 the Dome interior was redesigned by Robert Atkinson at a cost of £50,000 to give a total of 2,100 seats. An interior ceiling, electric organ and a new balcony were added. The Dome was reopened by the mayor, Sidney Gibson, on 14 September 1935.
Image reproduced with kind permission from Brighton and Hove in Pictures by Brighton and Hove City Council 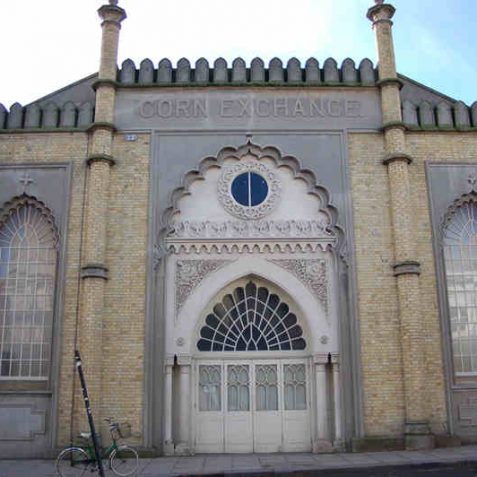 The Corn Exchange in 2007
Photo by Tony Mould 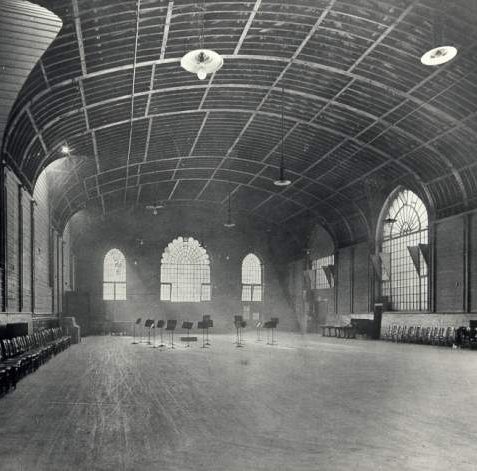 Interior of Corn Exchange , c. 1934: A group of music stands indicate that music practise may have been taking place. Alterations to the interior were made in 1934 by Robert Atkinson, including removal of the Royal Box and a construction of a new entrance in Church Street. The interior was restored to one large room with new windows in Church Street similar to the originals.
Image reproduced with kind permission from Brighton and Hove in Pictures by Brighton and Hove City Council 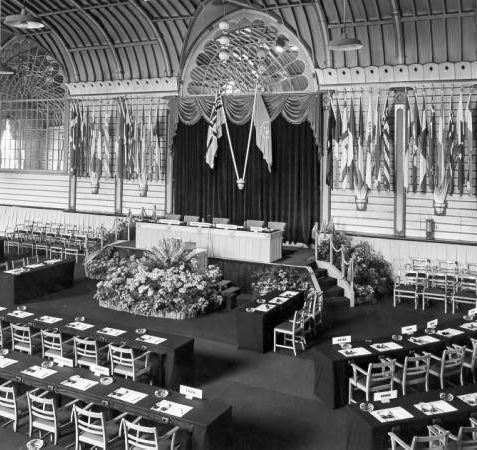 Conference at Corn Exchange, 1953: In this photograph an international conference of the United Nations is being held. Each place along the tables was provided with a headset through which simultaneous translations of the discussion could be heard.
Image reproduced with kind permission from Brighton and Hove in Pictures by Brighton and Hove City Council

a) ROYAL STABLES: The Dome was originally built as a stable for the Prince of Wales in 1803-8 by William Porden who based his design on the Paris Corn Market. Owing to slow finance and a shortage of materials the building took several years to complete and the contractor, Edward Saunders, died in 1805 heavily in debt because of the delays. Faced in yellow brick, the Indian style building cost £55,000 together with the adjacent riding school.
The great domed roof, 80 feet in diameter and 65 feet high, was one of the largest in the world at the time and was finished by the end of 1804. The exterior was not finished until April 1808, but the interior was in use by August 1806 and could accommodate forty-four horses with ostlers’ and grooms’ quarters in the circular galleries. With entrances on four sides, the stable opened out into a courtyard surrounded by coach houses and servants’ quarters, a site now occupied by the public library, and thence by a wide archway into Church Street . A frontage was erected along Church Street in front of the courtyard, but a proposed indoor tennis court was never built and in 1832 the space was filled by stables for Queen Adelaide and other buildings now occupied by the museum and art gallery. The west wing housed the riding school, now the Corn Exchange (see below). An underground passage was constructed in about 1822 from the stables to the northern end of the Royal Pavilion .
{45,194}

b) CONVERSION TO CONCERT HALL: Following the purchase of the Royal Pavilion estate in 1850, the stables and riding house were let as cavalry barracks from 1856 until about 1864; the name ‘Dome’ was used officially for the first time in this period. The interior was then reconstructed by Cheesemans Ltd as a concert hall, to the Moorish design of borough surveyor Philip Lockwood, at a cost of £10,000. The Dome reopened on 24 June 1867 as a magnificent assembly hall for some 2,500 people, and was adorned with a beautiful gas chandelier 30 feet high and 16 feet in diameter with 1,300 gas jets. The present Church Street entrance and the eastern portico were added in 1901, but the First World War saw the Dome in use as an IndianHospital along with the rest of the estate (see “Royal Pavilion”).
{45,194}

c) REFURBISHMENT: In 1934-5 the Dome interior was redesigned by Robert Atkinson at a cost of £50,000 to give a total of 2,100 seats. An interior ceiling, electric organ and a new balcony were added, while the road by the portico was made and the access road was extended through to New Road. The Dome was reopened by the mayor, Sidney Gibson, on 14 September 1935.
Now a grade I-listed building, the Dome Theatre was the principal concert, conference and entertainment hall of the town until the opening of the Brighton Centre in 1977; it remains important and there are plans for further refurbishment and improvement. Perhaps the most famous event held there was the Eurovision Song Contest, seen by an estimated television audience of some 200 million on 6 April 1974. The U.K. was represented by Olivia Newton-John, but the contest was won by the Swedish group Abba singing ‘Waterloo’.
{45,123,194}

d) CORN EXCHANGE: Built in 1803-8 by William Porden, the Corn Exchange was erected for the Prince of Wales as a riding school, and forms the western wing of the Prince’s stables now known as the Dome. The splendid interior measures 178 feet by 58 feet with an unsupported roof 34 feet high, and is now used for exhibitions, receptions and other functions. The exterior is in yellow brick and the building has very large Oriental windows. As part of the original Royal Pavilion estate the Corn Exchange is now a grade I-listed building.
In 1856 the riding school, which was purchased by the town in 1850 as part of the Pavilion estate, was let as a cavalry barracks along with the Dome. It acquired its present name on 1 October 1868 when the corn market was transferred from the King and Queen Inn and was then held every Thursday until the building was given over to a military hospital in December 1914. After the war it became an exhibition and function room, and in 1934 alterations were made by Robert Atkinson at a cost of £34,000; the royal box was removed, and a new entrance was made in Church Street with a large figure of Ceres, the goddess of corn, by James Woodford in a recess above the canopy. The interior, which had been divided at the northern end, was restored to a single grand room with new windows in Church Street similar to the originals.
At the same time the Pavilion Theatre was erected in New Road as a supper room for the Corn Exchange with a kitchen below. It stands on the site of a corporation yard and derelict stabling erected in 1806 for Mrs Fitzherbert, but its oriental facade sadly lacks the style of the original estate. The Pavilion Theatre seats 250 people.
{194}