It was January 1980; I went with my wife, who was then my girl friend, for an evening walk on Brighton beach. We walked just below Rock Gardens, mainly because it was an exciting night, dark and stormy. As we walked we were intrigued by shouting and some screams coming from the darkness out in the sea. It was windy and blustery and though we tried, we could not actually make out where the noise was coming from. 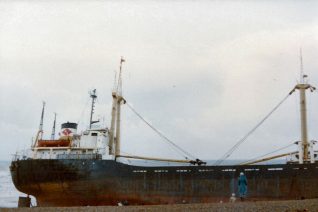 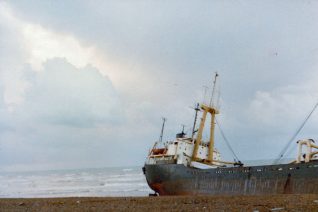 As we lived in Albion Hill, we drove down Rock Gardens the next morning to see if we could find out what all the noise had been about. As we turned into Upper Rock Gardens, we could see quite clearly the masts of a ship that we soon realised, was on the beach. We parked on the sea front and walked on to the beach to be confronted by this massive ship, the Athina B. 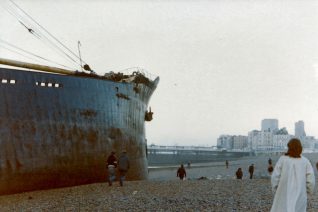 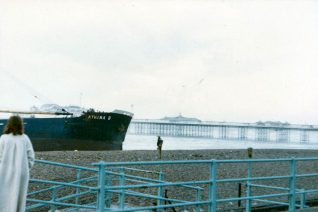 We had just touched it

There were no officials or police in attendance and only a few people near it as can be seen from the photos I took. Water was pouring from many of the upper areas and it all just seemed unreal. I took these photos before we went to work, but we came back later in the day. When we came back, the whole area was sealed off and the beach was full of people. You could not get any where near the ship, but earlier that morning we actually just walked up and touched it.