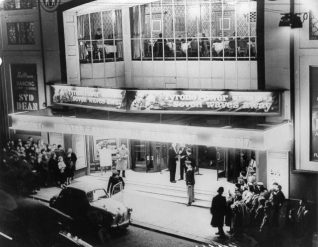 zoom
People queuing outside the Regent Cinema. Above the entrance the restaurant can be seen. A banner advertises that Tyrone Power is appearing in the film Seven Waves Away. At this time, there was ballroom dancing was evening with music by the Syd Dean Orchestra.
Image reproduced with kind permission from Brighton and Hove in Pictures by Brighton and Hove City Council 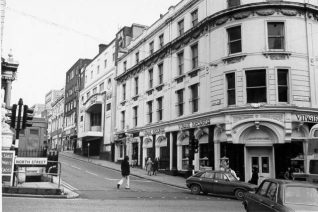 zoom
North Street and Queen's Road, 28 January 1974: This photograph shows an early Virgin Records shop at the western end of North Street. Nearby the Regent Cinema is closed awaiting demolition. Both of these buildings were demolished in 1974 and the site is now occupied by Boots the Chemists. A blue police box can be seen above the now filled-in public toilets under the clock tower
Image reproduced with kind permission from Brighton and Hove in Pictures by Brighton and Hove City Council

c) REGENT CINEMA: This spectacular cinema stood near the corner with North Street and was opened on 27 July 1921 by Provincial Cinematograph Theatres Ltd at the immense cost of over £400,000; it was built on the site of the Unicorn Inn and several other buildings. The Regent was the first of several giant Brighton cinemas, seating about 3,000 people, and indeed it was considered the most luxurious cinema in the country, the first `super-cinema’. Designed by theatre architect Robert Atkinson, and with a classical interior by Walpole Champneys, it had spacious foyers and galleries, the Ship Cafe, and a Georgian-style restaurant with an orchestra. There was also a side entrance in North North Street at the corner of Windsor Street.

In November 1923 the famous dance-hall or winter garden opened in the arched superstructure on the roof which had originally been intended for a roof-garden. The Regent, together with Sherrys in West Street, was then at the forefront of Brighton’s night-life for many years. Late in 1928 a serious fire destroyed the stage, the organ, and the proscenium arch, but the building reopened on 1 July 1929 as Brighton’s first `talkie’ cinema. The Regent was acquired by Odeon Cinemas Ltd in 1953. In 1962 a giant wide screen was installed, but the ball-room closed in July 1967 to become a full-time bingo hall, and the cinema itself closed on 14 April 1973 to be replaced by the Odeon complex at the Kingswest. The building was demolished the following year, and the site is now occupied by the Boots store.