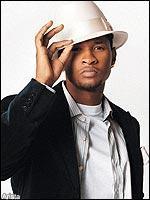 Usher came to Brighton and Hove in 2000 to celebrate the two towns becoming a city.