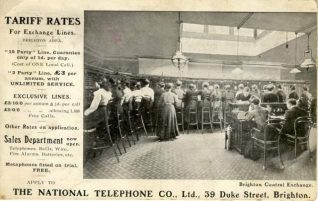 As in other areas of communications, Brighton was at the cutting edge of the early development of the telephone service in England. It was the first town to have a long-distance trunk connection with London, one of the first six to establish a municipal telephone service and one of the first batch of exchanges to have automatic equipment installed. The town had the first yellow pages telephone directory in Britain and even provided the voice of the speaking clock in the 1980s. The city can celebrate 125 years of telephony in 2007.

1879: Magnus Volk installs a telephone
The credit for bringing the telephone to Brighton must go to Magnus Volk, the inventor and entrepreneur. He had been born in 1851, the year of the Great Exhibition and, appropriately, the year when the first telegraph line opened between London and Brighton. In 1879, Volk bought a pair of telephone instruments from the United Telephone Company of London. He installed one at his home at 40 Preston Road and the other at the home in nearby Springfield Road of his friend William Jago, the new science master at Brighton School of Science and Art. Unfortunately, the overhead cable crossing Stanford Avenue was deemed an eyesore and Volk was asked to remove it. However, he installed two more instruments at the homes of two borough councilors and there were no further objections.

1881: Fire alarm system
In 1881, Volk moved to a new workshop at 25 Ditchling Rise (where Alfred Darling would begin making his pioneer cinematograph equipment only five years later). From here Volk organised a fire alarm system for the prestigious Brighton Health Congress that was held in December that year. The system linked all the locations used for the Congress to the headquarters of the police fire brigade at Brighton Town Hall. Volk was awarded a gold medal for this system, versions of which remained in use in many parts of the country until the 1940s.

Significantly, he also installed a telephone mouthpiece on the conference speaker’s podium in the Dome to which were connected eight listening devices on Volk’s exhibition stand in the Royal Pavilion. At the same time it was reported that the United Telephone Company had been granted a licence by the Postmaster General to open an exchange in Brighton and that Magnus Volk was appointed the agent for a new subsidiary, the South of England Telephone Company

1885: 138 subscribers
By 1885, when the Brighton telephone directory was included with the London subscriber list, there were 138 subscriber lines connected to three exchanges serving Brighton, Hove and Preston. Low numbers were used in central Brighton, numbers in Kemp Town were in the 400 range, in Hove the 500 range and two were in the 700 range allocated to the new Preston exchange. Both the latter and 14 other places were designated as ‘Call rooms’ from which ‘the public are invited to test the system, free of charge’.

The largest number of subscribers by trade or profession were coal merchants, butchers and estate agents. The area of coverage stretched from  Marine Parade in the east to West Brighton wharf and Aldrington in the west.

1893: Recognition of Volk’s work
For his efforts in telephony, Magnus Volk was elected a fellow of the Imperial Institute in 1893, nominated by no less a personage than W H Preece, engineer-in-chief of the Post Office Telegraph Department, who was soon to become the principal champion of Marconi’s efforts with wireless telegraphy.

1899: Improving the service
By 1899 the value of the telephone was more widely recognised – even though as recently as 1895 Albert Morley, the Postmaster General (PMG), had said that ‘the telephone cannot, and never will be, an advantage which can be enjoyed by large masses of the working classes’. The Unionist government of Lord Salisbury was now coming under pressure to improve the service. Local councils already provided other utilities, such as water, sewage, refuse collection, gas, electricity and public transport. Adding telephony seemed a natural step.

Initially, £2m was voted by parliament for the PMG to set up 80 telephone systems and to allow licensing of public authorities ‘to provide systems of telephonic communication and to defray the expenses thus incurred out of the Corporation funds’. The existing commercial companies were prevented from establishing services in places not previously served and regulations were introduced to ensure intercommunication between rival systems.

1901: Brighton granted a licence
Only 55 authorities out of 1,334 in the country showed any interest. Brighton was among 13 towns granted one of the public authority licences, dated 3 May 1901 and expiring 30 April 1926. Only six of the towns actually went ahead, including Brighton, construction of the system beginning in March 1903. The Brighton Corporation Telephone exchange was in Palace Place, adjoining the Pavilion, with offices at 82 Grand Parade. The system was opened for operations on 5 October 1903 by the mayor, John Buckwell. Other offices were established at 47 Dyke Road; 94-96 Goldstone Villas, Hove; Church Street, Shoreham; and New Road, Hurstpierpoint.

Trying to understand the charges!
No charges were made until the first 750 subscribers were enrolled, which occurred by the following March. The annual cost of unlimited service, taken by 90 per cent of subscribers, was £5 10s. The standard service cost £3 10s plus 1d per originating call. A two-party line was 4 guineas (£4 4s) and a four-party line £3. It was estimated that the cost of installing and connecting a subscriber line was £23 10s, implying that it would take over four years for the borough to recover the cost of installation even on an unlimited service line.

In a manner remarkably similar to telecommunications in the 21st century, consumers had to make calculations and forecasts of usage before deciding on the more suitable offer. The NTC charged a flat rate of £10 a year for unlimited service, £5 10s a year for 2,500 calls or £5 for 1,800 calls, plus ½d each for additional calls. A two-party line cost £3 10s. On a 10-party line the charge was 1d per originating call (minimum of one call per day), making the annual cost a minimum of just over £1 10s. There was even a 20-line option costing £1 5s plus ½d a call.

Room for expansion
The area covered by the NTC stretched from Rottingdean to New Shoreham and inland to Burgess Hill, a total of 120 square kilometers. The exchange was housed in the Pavilion and had a capacity of 1,000 lines, with room to expand to 4,500 lines. Exchange equipment and subscriber instruments were made by Ericsson Bell.

NTC’s Sussex district office was at 36 Ship Street and the contracts department at 39 Duke Street. By 1905 there were nearly 100 public call offices around Brighton and Hove.

On 10th September 1906, the Corporation sold its telephone system to the General Post Office for £49,000. At the time it had 1,404 subscribers. Just over five years later, on 1st January 1912, NTC and the remaining municipal telephone services, except the one in Hull, were nationalised under the control of the GPO.