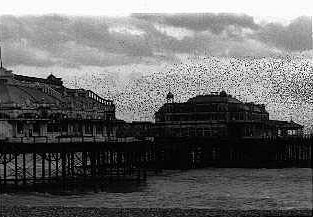 zoom
The "Bird Ballet" at its height
All photos on this page from the website of The West Pier Trust :

zoom
The fire begins to take hold and it's going ...
All photos on this page from the website of The West Pier Trust :

zoom
... going ...
All photos on this page from the website of The West Pier Trust :

zoom
... gone. The Starlings must find a new home.
All photos on this page from the website of The West Pier Trust :

People might be surprised at the seemingly inescapable attraction that the Seafront has for homeless people (well, maybe not during the summer months) but, in fairness, for those who choose not to “ham-and-egg” or “do the Issue”, after a certain time of the day it is one of the few places to spend your time : the day centres have closed, the evening shelters won’t open for a while, the library’s shut (even on wet days), so down to the Seafront it is!

And it was there that I discovered the beauty of “The Murmuration” at the West Pier (to be honest, I didn’t even know it was called that until I saw a video of this truly phenomenal sight for sale in a Seafront kiosk).

The amazing thing was you never quite knew when it was going to start: always at dusk, admittedly, but they just suddenly seemed to be there: a cloud of tiny shadows, swooping around the sky, creating stunning patterns, sometimes disappearing (totally!) for a fraction of a second before resuming their airborne ballet. Then you noticed the birds joining the corps from over your head: turn to face the City and here they came. Twos, threes, tens of birds streaming from wherever they had been to join the dance. And that is what it was – a thrilling dance, its choreography controlled by some avian Bob Fosse.
All that I could do was watch, amazed: for however long I watched the display, my worries about my situation left me: homelessness and its difficulties were forgotten, a cocoon of joy wrapped around me as I watched the starlings, enthralled. Since the West Pier burned down, I have not seen the Murmuration in its full glory – the starlings’ “condominium” has been destroyed by man. However, it still happens and I can’t help feeling that, before long, this glorious display shall return to its former heights.

Strange to think that they (or, at least, some of them) are homeless now.