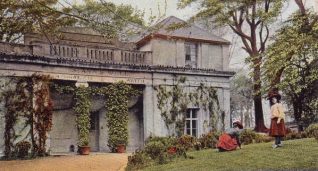 St Ann’s Well Gardens is a popular public park in Hove of ancient trees and winding pathways about half a mile inland from Brunswick Square and the sea. Its amenities include a bowling green, tennis courts, a children’s play area and a well-stocked fish pond replenished by a trickle of water from a much depleted ancient spring.

Taking the waters
In the 18th century the spring water emerged with greater force allowing the place to proclaim itself a health spa at a time when the taking of mineral waters was becoming fashionable as a cure-all for the many incapacities suffered by rich and poor alike. Around 1800 an imposing pump room was built over the spring to house various facilities and accommodate the large numbers who came seeking therapeutic relief. Towards the end of the 19th century the flow of the waters had considerably declined and the enterprise was closed down. The pump room itself was demolished in 1935. A mock well head marks the site today.

The Manor of Wick
In the middle ages St Ann’s Well formed part of the manor of Wick (Upwick or Aldwick), a narrow band of land running from the shore line of the present day Brunswick area to meet the boundary of the manor of Preston in the north. It later became known as the Wick Estate and passed through a succession of private hands until its ownership was eventually transferred to Hove Corporation.

The Estate was in the hands the Stapley family from 1573 until 1701 when it was sold to the Scutts, a family of Brighton brewers. In 1825 the Rev. Thomas Scutt sold off part of the land to the south of Western Road. This became the Brunswick Estate. In 1830 the remainder of the Wick Estate was sold to the brilliant fanancier and philanthropist Sir Isaac Lyon Goldsmid, who moved into the long-demolished property known as The Wick, located just outside the southern border of the modern park. It is believed that Sir Isaac was responsible for setting out the gardens during his ownership of the land. After his death in 1859, members of the Goldsmid family inherited the Estate and were responsible for a considerable amount of building development in the area surrounding the gardens from 1890 onwards.

George Albert Smith
In 1892 the film pioneer George Albert Smith became leaseholder of the gardens. Determined to put the place on the map and make it commercially viable, he organised hot air balloon demonstrations, parachute jumps and added such attractions as a monkey house and a gypsy fortune teller. He used part of the pump house as a film laboratory, producing about fifty short films a year. Here film editing was born and Smith invented the close-up. Building on this success, a glass house film studio was erected. However, he eventually moved to premises elsewhere in the town, and by 1913 Hove Corporation was in full ownership of all the gardens.

Increased amenities
Once it had become a public amenity, a number of existing buildings were incorporated, including Grasshopper Cottage, near the bowling green, and Wick Farmhouse by the Furze Hill entrance. Both these were demolished after World War II. A rustic swiss chalet style cafe used to refresh the needs of visitors prior to its replacement by a more modern building in the 1970s. These changes did not pass without some local protest.

Special character
The parks and gardens department of the local authority must be credited with its careful maintenance of the site to a high standard over the years with excellent floral beds and borders and shrubbery. A one-time croquet lawn in the south west corner is now a scented garden for the blind. In recent years improvements have been made to the fish pond and additional equipment has been placed in the children’s area. Interestingly, the special character of the site which caused it to be set aside and protected long before any buildings appeared seems set to guarantee its enjoyment by future generations in perpetuity.