You are here: HomenextPlacesnextStreetsnextGreenwaysnextOvingdean: Greenways Corner 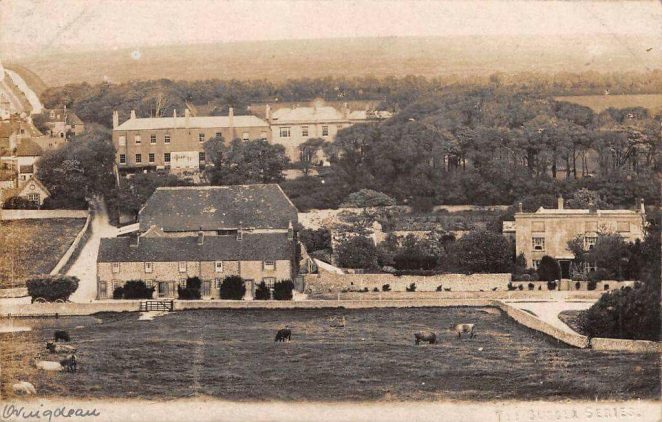 Pre-Domesday Book there is nothing written about Ovingdean, so we can only speculate on the basis of archaeological knowledge. The Saxons may have founded Ovingdean in or around the 8th century and may have built a wooden church where the present St Wulfran’s now is, in the 10th or early 11th century. The first written information on Ovingdean is in the Domesday Book, of 1086; at that time the population of Ovingdean was about 90 people who included the lord of the manor and his family.

The photograph (undated)above, shows a view of Greenways from Cattle Hill, which is adjacent to St Wulfran’s Church. The central point of interest is a terrace of five two-storey cottages. There is no written history of their age, but they did exist in 1839; and were perhaps built c1800. The cottages housed workers from the manor farm. Ovingdean Grange, home of the tenant farmer is on the right of the photograph. Ovingdean Hall, built-in 1792 by Nathaniel Kemp, on 350 acres, which included a small farm complex, can be seen in the distance.

From its ancient beginnings as small 8th-century Saxon settlement, Ovingdean has grown to a village with a population of approximately 1200. Peartree Cottages were demolished in c1934 to make way for a curved corner. Previously it was very difficult to turn a cart in the sharp angle of the corner. Two semi-detached council houses, again for the farmworkers, were constructed on the site; these are Nos 7 and 8 Greenways Corner. Others were built on the opposite side of the road, and so the face of the village began to change. As housing development is a constant in Ovingdean, it is hard not to see its future as a suburb of Brighton. 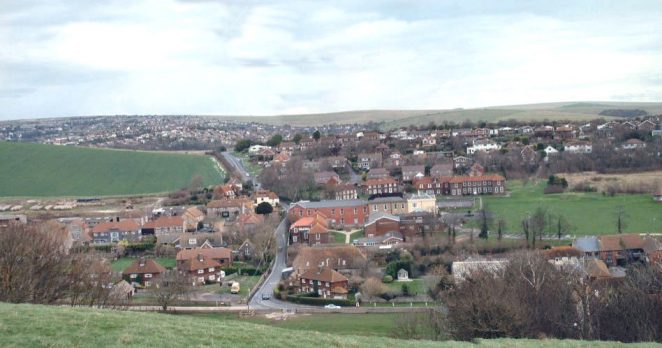 Greenways Corner as it is today – © Tony Drury