You are here: HomenextTopicsnextBathingnextBrighton experience by the Iwakura Mission c1872 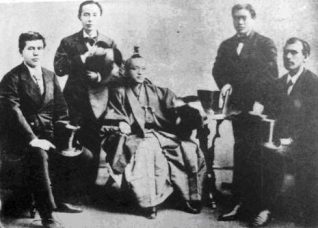 After about 120 years since Dr. Russell published the paper, “A Dissertation on the Use of Sea Water in the Diseases of the Glands” that made Brighton so famous as a pioneering sea-bathing resort, Brighton was visited by a notable delegation from Japan, a member of which later became a major player that contributed to the advancement of Japan towards a modernized country.

The delegation is called the Iwakura Mission that was headed by Tomomi Iwakura an Ambassador plenipotentiary. The Mission’s purpose was twofold; to renegotiate the unequal treaties with the U.S.A., Great Britain and other European countries that Japan had been forced into during the previous decades, and to learn from the west how it managed their education, and technological, and cultural developments, and created their modern social economic and military institution, for the advancement towards modernization of Japan.

Considering that it was only 4 and a half years since the inception of the new government, after overthrowing the 264 years of the Tokugawa feudal rule, the idea to send their young oligarchs who will become future leaders for a long-term tour of the West, is quite innovative. The Mission’s tour lasted for 631 days, far exceeding a year originally planned. Although Iwakura Mission could not review the treaty, their experience is probably the most influential in modernizing Japan, since what they saw in the West impressed and shocked them enough to take immediate initiatives for Japan to be modernized.

The official chronicle of the Iwakura mission, compiled by the official diarist Yoshitake Kume, writes the visit to Brighton in “A True Account of the Observation of the Ambassadorial Mission to America and Europe”, writes on Brighton as follows;
“Brighton is a prosperous community by the sea-side with the population of 90,013. It faces the English Channel with rolling hills on the coastline. It enjoys a mild climate and fresh air. A physician recommended this place fitting to breathe clean air, and to bathe seawater for it was believed to strengthen the skin and improve health. With this doctor’s recommendation a few people visited the sea-side in Brighton and recovered their health. Since then, many people from London flocked to Brighton also to benefit from the seaside environment. Thus the fishing village was transformed to a large city with villas built alongside the seaside for the people to spend their summer. Even the prince stayed for the summer retreat“.

Arrived in London in 1872
The Iwakura Mission arrived in London on 19th August 1872 to greet the British Foreign Secretary and to apply for an audience with Queen Victoria. However, the Queen was in Scotland then, so Sir Harry Parks recommended them to make a visit to Brighton by train. On the 20th August 1872, they visited Brighton where they were received by the Mayor at the station. They visited a school, a museum, the sea-side, and the newly built Aquarium of Brighton. The official scribe, Kume, writes in his account how impressed they were by the Aquarium; “it felt like walking under the sea to watch fish swim from sideways”.

Lunch with the Mayor
And after attending a conference by the Geographical Society of Britain held in Brighton, they were invited at the Mayor’s residence for lunch where the Mayor welcomes Iwakura’s delegation at that occasion, Iwakura expressed in Japanese (with interpreter) his deep appreciation for the warm welcome the Mayor and his wife have extended to them in Brighton. On the same afternoon, they headed back for London. 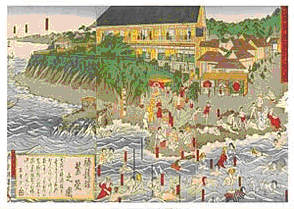 Japan’s first sea-bathing resort
We at the Oiso Municipal Museum in Japan, realized that the summer activity by the sea-side and sea-bathing that Japanese people take pleasure in nowadays, links us very closely to Brighton through the Iwakura Mission. The concept of sea-bathing was adopted also by a Japanese physician, Jun Matsumoto. During his training to become a doctor, he came across a term “sea-bathing” from a Dutch medical textbook. Thanks to Dr. Russell’s paper; sea-bathing was already a common practice in Europe. It was in 1885 Jun Matsumoto realized his dream of opening a sea-bathing hotel and clinic in Oiso, making Oiso Japan’s first sea-bathing resort.

Anglo-Japanese Alliance
This Dutch medical textbook Matsumoto read, was translated by Doukai Hayashi who is Matsumoto’s brother’s adoptive father. His brother Tadasu Hayashi who later became the foreign minister signing the Anglo-Japanese Alliance with the British foreign secretary Lord Lansdowne on 30th January 1902, was a member of the Mission. As well as, Sensai Nagayo, a student of Matsumoto who later contributed in establishing Japan’s Health and Welfare System, and opened a sea-bathing resort in Kamakura, near Oiso. 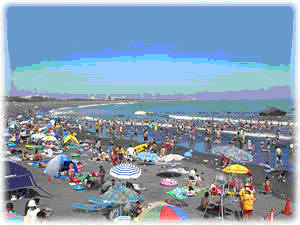 Brighton’s greatest export
Thus, it is easily conceivable that Dr. Matsumoto himself was informed of the development of Brighton as a sea-side resort alongside health and sanitation information from Europe through the Mission. Observing how the mere fishing village of Oiso developed into a fashionable sea-side resort where many Iwakura Mission members, royalties, business tycoons, politicians and celebrities built their opulent sea-side villas, and railways were built specifically for the resort; the development trajectory uncannily resembles that of Brighton, suggest this very fact. Iwakura Mission’s experience in Brighton points directly to the sea-bathing culture of Japan. Probably, the greatest export of Brighton to Japan.