The scourge of smallpox 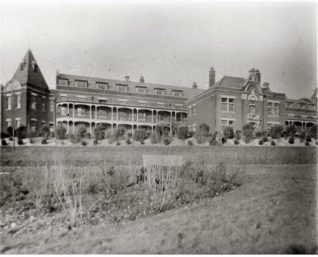 zoom
Bevendean Hospital originally opened in 1881 as a smallpox sanatorium. The main buildings were erected in 1898, and the institution became the Brighton Borough Hospital
Reproduced courtesy of Royal Pavilion, Libraries & Museums, Brighton & Hove

For a world in which smallpox has been completely eradicated – the only disease ever to have been eliminated so successfully – it is hard to imagine the fear that the public lived with when an outbreak was reported. Yet the most recent outbreak in Brighton was within living memory, occurring as recently as 1950.

Prevention: the practice of vaccination
The Vaccination Act passed by parliament in 1853 introduced compulsory vaccination against smallpox of infants within three months of birth, with the threat of a £1 fine, and imprisonment for repeated failure to comply. Since 1840 the Poor Law Guardians had been authorised to vaccinate all infants under their charge – the children of paupers – at public expense. The Vaccination Act of 1867 extended the age limit for compulsory vaccination to 14 years and introduced cumulative penalties for non-compliance.

‘Arm to arm’ system
At that time it was a common practice to vaccinate a child and then, if the child was well at an examination eight days later, to take lymph from the vesicles on their arms with which to vaccinate other children. The vaccine was thus cultured within the local community by the ‘arm-to-arm’ system. Three major national outbreaks of smallpox occurred in the years after the Act came into force, each more virulent than the last. In 1857-59 there were 14,000 deaths; in 1863-65 the death toll rose to 20,000 and the epidemic of 1871-72 claimed 44,800 lives.

John Badcock and vaccination
One of the advocates of compulsory vaccination was John Badcock, who practiced as a ‘vaccinator and chemist’ at 128 St James’s Street, Brighton. Badcock himself cultured his vaccine in a cow and advocated this method as producing superior results and as a means of creating a stockpile of vaccine to use in the event of an epidemic. (The word ‘vaccine’, coined by inoculation pioneer Edward Jenner, comes from the Latin for ‘cow’.)

High risk of infection in Brighton
In a letter to The Medical Times in September 1853 Badcock reported that because of its high number of visitors, ‘few towns are more exposed to the introduction of infectious diseases than … Brighton’, and that there had been an outbreak the previous year for which he had supplied 800 doses of vaccine in a month. He had been vaccinating an average of 1,000 children a year for 12 years, ‘nearly nine-tenths of them gratuitously: a great proportion of them being decent mechanics, unable to pay the usual fee, but unwilling to apply as paupers to the parish surgeons’.

Response to Badcock’s charity
Three weeks later The Medical Times published a response from an anonymous doctor who asked whether it had occurred to Badcock that in treating 10,800 people free of charge ‘he had been the means of preventing the same number of eighteen pences, or £810, from finding their way into the pockets of the parish surgeons. … Or, supposing these “decent mechanics” were too proud to have their children vaccinated by the parish surgeon, I dare say there are in Brighton, as elsewhere, plenty of young practitioners who would be very glad to do it for half-a-crown – a sum, by the way, few of these mechanics would grudge spending on themselves in beer or gin, or their wives, as an instalment for a magnificent new bottle-green velvet mantle. I have practised enough among the artisan class to know, that while in adversity they often exhibit the most heroic patience and kindliness of heart to each other, yet in prosperity they are, as a body, recklessly improvident, and should be taught that what is worth having is worth paying for.’

Opposition to vaccination
Despite this onslaught, Badcock was subsequently acknowledged as a pioneer of the technique of culturing vaccine in cows But by no means everyone was convinced about the need for vaccination. In terms reminiscent of the arguments about the MMR vaccine in our own time, it was argued that smallpox vaccination caused more disease than it prevented. During a riot in Brighton, a vaccination station was wrecked and the public vaccinator attacked and injured.

Religious opposition
Much opposition had a religious basis. In 1877 a Mr G J Pratt of Brighton refused to allow his child – ‘as God gave it to him’ – to be vaccinated. Some opponents went so far as to claim that vaccination was a form of devil-worship, turning innocent children into anti-Christs. Vaccination scars were ‘the mark of the beast’ and the Book of Revelations was invoked in arguments that vaccination would hasten the apocalypse.

The Vaccination Act of 1898
This act removed the cumulative penalties and allowed parents to register their conscientious objection – then a novelty in English law – to vaccination, but this had to be argued before magistrates. The 1907 Act ended compulsion, allowing a simple statement of objection to be made. As many as one in four children were not treated after this. Even among supporters, improvement in social conditions, perhaps more than vaccination, was seen as the key to preventing the spread of disease.