You are here: HomenextTopicsnextMiscellanynext1920s Birthday Postcards 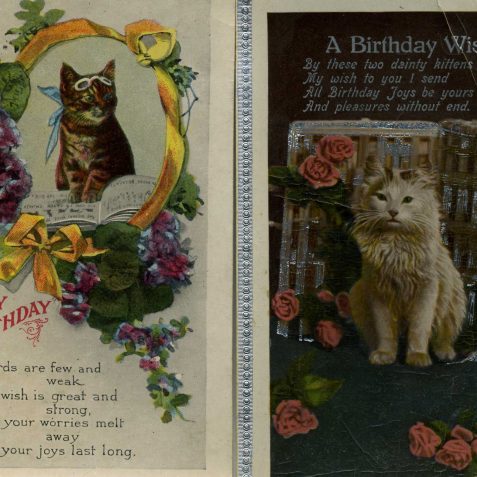 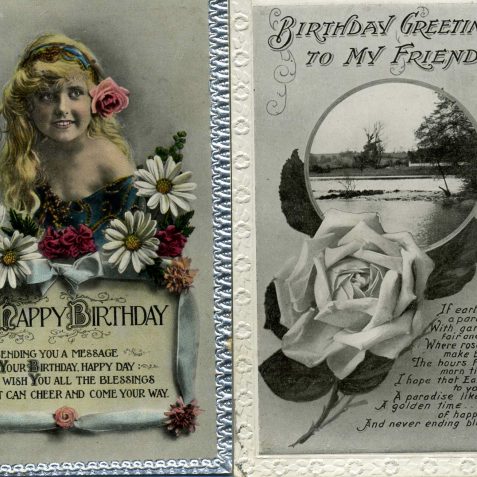 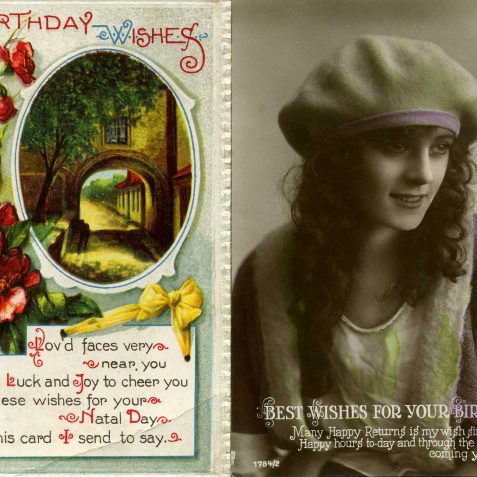 Jennifer Tonks (nee Smith) enjoyed my Christmas postcards from the 1920’s that I submitted. My mother kept over 30 greetings cards (some hand delivered) from that era, many quite sophisticated with Sister, Cousin or Mother printed on the front. As my mother’s birthday was on Epiphany, 6th January, I am submitting some typical examples of the birthday postcards. The one with the cat is again from her friend Hilda with a simple message: “Dear Nellie, Just a line to wish you Many Happy returns of the day from your loving friend Hilda”. This card is addressed to Miss N Terry and referred to my mother on this occasion.

Hand embroidered cards
My grandmother and mother were both named Ellen Ann Terry so there was confusion; my grandmother was usually called Nellie or Nell and my mother Nen or Nin but these names often got transposed. The card with the archway reads; “Dear Nen, Just a card wishing you many happy returns of the day of your 21st birthday, with love from Emmie and George and Georgie”. My mother was born in 1906 and George was my mother’s brother. Two cards in the collection are hand embroidered and originate from Paris although probably purchased in Brighton.

A widow for 31 years
My grandmother was relatively poor. My grandfather had been ill for some time and died on 18 May 1921. She rented a house at 12 Bonchurch Road and worked in a laundry nearby. She later took in washing and had a copper in the scullery with the fire underneath. She was a widow for almost 31 years and died on 16 May 1952 when I was 8 years old. The house had gas lighting, open fires, a black range, irons that had to be heated on the range, no hot running water or electricity, an outside toilet (I still dislike spiders to this day) and recycling of paper took a different form then. The gas lighting faded when a shilling was needed in the slot meter.

Happy childhood memories
I remember sleeping at the house in winter with a stone hot water bottle that could burn your toes, gas lighting that made wonderful patters on the ceiling and the glow of a coal fire. Health and safety was not thought about and I drifted off to sleep quite happily. I remember a very comfortable feel about going to sleep and the same was true of family life in my grandmother’s house generally. The cards somehow reflect that. In our family Christmas decorations were always left up until my mother’s birthday but had to be taken down that evening as it was considered bad luck to leave them up after the three Kings had arrived at Epiphany. My wife and I still leave our crib set up until the day of Epiphany.