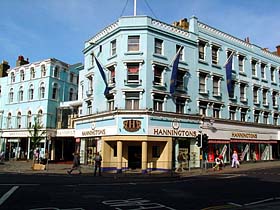 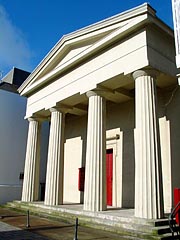 Hanningtons
Hanningtons, the department store, will close for the last time on 30th June. It was established in 1808 by Smith Hannington as a draper’s store and received a royal warrant from Queen Victoria in 1914. There are plans to turn the building into smaller shops, dividing up the former department store’s warren of rooms and levels. See more about Hanningtons

The Astoria
The Astoria cinema, which opened in the 1930s, is to return to being a venue for screen and stage shows. The Astoria closed as a cinema in 1977, when it became the Coral Social Club and later a bingo hall. A consortium of local entrepreneurs hope to open the venue in time for December 2003 – the 70th birthday of the Astoria. See more about the Astoria

Brighton Unitarian Church
Brighton Unitarian Church, in New Road, is in need of repair. Structural faults have been found and the stain glass windows are in danger of falling out. The church was built in 1820. It was designed by Amon Henry Wilds and based on the Temple of Theseus in Athens. The original congregation was expelled from a Baptist church in 1793. They bought the plot of land in New Road from the Prince Regent.