You are here: HomenextTopicsnextEducationnextSchoolsnextConstruction completed in December 1859 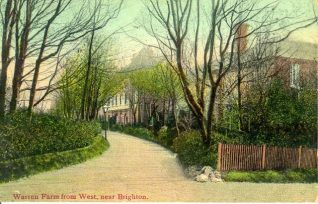 b) WARREN FARM SCHOOL:The most historic building remaining in Woodingdean is the former school building in Warren Road. It was originally erected on twenty acres of Rottingdean parish by the Brighton Board of Guardians as an industrial school for poor children whom it was not considered appropriate to keep in the workhouse with adults. Known as the Warren Farm Industrial Schools, construction commenced in March 1859 to the design of parish surveyor George Maynard, and the building was completed on 1 December 1859 with accommodation for 300 children. In March 1858 a well was started, but water was not reached until 16 March 1862 by which time a depth of 1,285 feet had been reached, the deepest dug well in the world. It was only when the water supply was ready that the buildings were opened, and on 14 August 1862 seventy-seven boys and sixty-five girls marched in procession from the Dyke Road workhouse to Warren Farm. In 1878, however, the well was abandoned in favour of the corporation’s piped water supply.

The boy inmates were taught skills in gardening, tailoring and boot making, etc., while girls were instructed in domestic service. The Warren Farm Industrial Schools continued until the replacement of the workhouse system in 1930 and then continued as a children’s home until the early ’50s. In 1937 infant and junior schools were also opened in the buildings. After the children left, the buildings were used for miscellaneous purposes including civil defence, the branch library and manufacturing, but in about 1955 they were taken by the St John the Baptist Roman Catholic School which moved from Upper Bedford Street, and were later renamed the Fitzherbert R.C. Secondary School; the school closed in 1987.

The main building, which is a rather plain edifice, is now included on the council’s local list of buildings of interest. In 1989 the conversion of the building to a sponsored ‘city technology college’ for around 800 11- to 18-year-olds outside the authority of the county council commenced. Michael Faraday College, which was to be one of the first of its kind in the country, teaching subjects according to the Steiner principles and with an emphasis on environmental issues, was, however, abandoned in April 1990 because of a lack of finance, leaving the buildings’ future in some doubt. The four blocks of houses to the east were built in 1911-12 by the guardians and are now used as offices and clinics. {6,24,83,115,123}