Fifty girls under one table

The first time I was really close to a bombing was when a bomb fell in our road. I wasn’t there but in the local church hall, with the Girls Life Brigade. We’d heard the sirens but just carried on. Then the pips went, so we knew they were overhead. We still carried on as there was nowhere to go, but when the first bomb dropped, large lumps of ceiling fell and the windows flew in all over us. We all dived under the only table in the room. This was instinctive as we had been told to do this if a bomb fell. Imagine 50 girls all trying to get under one small table. Too late because we were all covered in plaster and choking, and we looked like ghosts. Still, none of us was hurt, and a bit later, the “All clear” went, and an Air Raid Warden came in and said that the bomb had fallen in my road. He said we’d all better get home.

What a sight to see 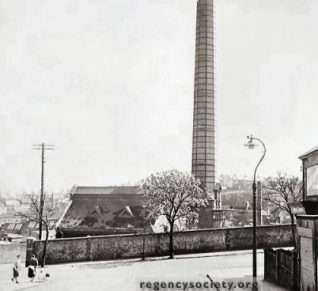 When I got home to Hollingbury Road, what a sight it was to see. The bomb had fallen in the local abattoir. Also there was what was known locally as the  “Dust Destructor”; this was a huge chimney, built in 1869, and all the rubbish of the town was burned there. We used to go and play there in the evenings and watch huge black rats sorting through the debris and ignoring us as if we weren’t there. It was opposite the bottom of Hollingbury Road, and we lived in No. 5, very near the bottom. There wasn’t a window left intact in the road as far as I could see, and glass everywhere.

Everyone was out in the road and I was sucked into the embrace of my foster mother,whom I called “Nan”, who had thought I’d been killed. Somehow, kids get used to things and make the best of them. I just thought how much I had to brag to friends about then. This was where the “Wartime spirit” came into action. Everyone was laughing and doing things for each other. It was summertime and in wartime we had ‘Double British Summertime’ which meant it was light after 11 o’clock. So we were able to stay up and watch everything that went on. We had nowhere to sleep anyway.

In no time at all an empty shop on the corner opposite Mr Chalk’s shop, had opened up, and teams of men and women were sitting there and taking reports from every household about damage they had suffered. I think no-one was killed but lots would have suffered cuts, these would have been handled by first-aid people and ambulance crews. My sister used to help with this work, she was so brave. When she was 16, she wore a tin hat and had a special gas mask; when the sirens went, she used to run two miles up Hollingbury Road and down Preston Drove to Preston Manor. Often she did this trip in the middle of the night, in blackout. When the bomb fell on Kemp Town Odeon she was there too, helping save those kiddies left alive; I was so proud of her.