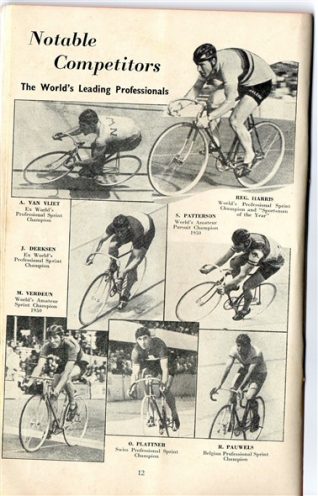 zoom
Famous cyclists: click on image to open a large image in a new window
From the private collection of Mick Deacon

On summer nights in the 1960s, there were race meetings at the Preston Park cycle track; they attracted quite a crowd. Lots of local cycling clubs and also some from outside of Brighton were involved. It was a cheap night out for the enthusiastic spectators. Some years before, the race meetings had attracted the racing star and world champion, Reg Harris.

A race to remember

One evening, quite a lot of us were taking part in a junior race. All was going well until we reached the final, ‘banked’ corner, sprinting towards the finishing line. Suddenly, the two boys in front of me touched wheels and I went into the back of them. It all made for an awful crash. One boy had his front teeth knocked out and the other two of us had dreadful skin damage and later, heavy bruising. I can remember sliding along the track, tearing skin and my yellow, Brighton Velo jersey. I remember being very upset about the top.

The three of us were taken to the Royal Sussex County Hospital and had grit taken out of our wounds. Those wounds were then dressed, I still have the scars. A nurse said to me, ‘so you were in a race on a dirt track?’  I said, ‘no, it is a proper racing track.’  I suspect my pedantry was lost on her but it was important to me. I was off school for a bit as my dressings had to be changed regularly and I found moving around difficult and painful.

Once most of the damage was healed, I went back to the track and climbed on my bike. I started to shake and was unable to ride. Fortunately, I had no problems with road riding and racing. But I never went back to Preston Park track