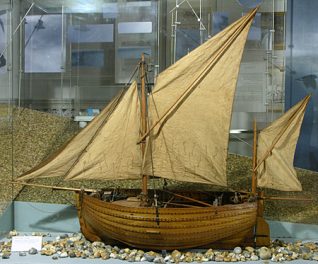 zoom
Model of Brighton Hog Boat. This is a wooden model of a Brighton Hog Boat or 'Hoggie', as they were also known, which is broad and has a a wide flat bottomed hull. The model is fully decked and divided into three sections, all at different levels. Fittings that are featured on the model include a lamp at the masthead, an anchor and a lee-board which was used, as appropriate, to compensate for the flatness of the bottom of the boat. The hog boat was a type of fishing vessel, which had a wide flat bottomed hull and were broad in shape. The flatness of the bottom of the boat was to allow for easy manoeuvring and launching from shingle beaches. The original boats were built locally on what is now Hove Lawns and it is claimed that they were the typical fishing boat of the Brighton area only, during the 18th and 19th centuries, as they were specifically adapted to the form of the local beaches.
Reproduced courtesy of Royal Pavilion, Libraries & Museums, Brighton & Hove

Background
By the late sixteenth century the inhabitants of Brighton were principally divided into those dependent on the fisheries, and those supported by crafts and farming; the latter were known as ‘landsmen’. Both groups had grievances: the fishermen were unhappy that the landsmen paid no contribution to church maintenance or town defences, nor to the relief of the poor who were said to be ‘a great burden increasing daily’. On the other hand the landsmen, who paid a rental only for the windmills, were unrepresented on the ‘Society of the Twelve’, a self-perpetuating ancient body probably derived from the jury of the hundred court which was regulating some of the town’s affairs and assisting the constable. (The Society of the Twelve probably died out around 1641, the last known reference.) Both sides petitioned Parliament in 1575 and again in 1579 for an inquiry.

On 12 February 1579 the Privy Council established a commission of inquiry comprising four local worthies: Thomas Sackville, the Lord Buckhurst, one of the lords of the Manor of Brighton and joint Lord Lieutenant of Sussex; the Earl of Arundel, the other lord of the manor; Sir Thomas Shirley of Wiston; and Richard Shelley of Patcham Place. Any two commissioners were authorised to act and so it was that Buckhurst and Shirley ordered the fishermen to meet and set down in writing their ancient customs and orders on the contribution and use of profits from the fisheries.

The book
The result was The Book Of All The Auncient Customs heretoforeused amonge the fishermen of the Toune of Brighthelmston (sic). Two copies were made in black ink on parchment, dated 23 July 1580, and are described below.

An introduction and explanation is followed by a detailed section on customs relating to the fishing ‘fares’ or seasonal voyages, the payments due to the men, and the ‘quarter-share’ contribution to the church-wardens’ funds. There is a passage of regulations on the sizes of nets and hooks to be used, and further orders on payments. Then follow orders for the three church-wardens, who were to be two fishermen and one landsman, and for the composition of the Twelve who were to be ‘the ancientest, gravest and wisest inhabitants, eight fishermen and four landsmen, to assist the constable as required’. A list of 103 ‘husbandmen and artificers’ is given, with each ordered to pay annually on St Stephen’s Day an individually specified rate of between three farthings and four pence.

The last order concerns the books themselves. One was to be kept by the Lords Arundel and Buckhurst, the other was to remain in the town in a chest secured by three locks and was to be read annually in public by the vicar or parish clerk. Alterations to the orders or rates could be made by the vicar, constable and twenty inhabitants, subject to ratification by the two lords. Any doubts or ambiguities were to be settled by any two of the commissioners, although this practice appears to have ceased with the death of Lord Buckhurst in 1608.

The book concludes with notes on the town’s ordnance and property which included one windmill, the Blockhouse and the Townhouse. It is finally endorsed with seven signatures and eighty-three marks of the town’s principal inhabitants. The Arundel and Buckhurst copy of the book is now in the British Museum, but the town’s copy eventually found its way into the offices of solicitor William Attree at 8 Ship Street where it is still preserved by his successors, Howlett Clarke Cushman.

The Second Town Book
The book was revised on 2 February 1618 by the mutual agreement of fishermen and landsmen as the ‘Second Town Book’ or ‘Costumal’ of Brighton. It included more detailed orders on the expenditure of the quarter-share contributions, while the landsmen were ordered to pay one-half of the fishermen’s contributions. The church-wardens and any six of the Society of the Twelve were empowered to raise a tax if required. No building was to be erected to the annoyance of the market place on the cliff or the Blockhouse.

The customs and orders set down in the two books were legally binding and could only be repealed by Parliament. One order remains effective to this day as, unusually, three church-wardens are still chosen for the Parish of Brighton (St Peter’s).

Any numerical cross-references in the text above refer to resources in the Sources and Bibliography section of the Encyclopaedia of Brighton by Tim Carder. The following resource(s) is quoted as a general source for the information above: {1,6,18,273}