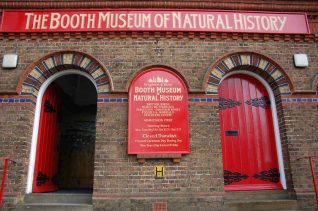 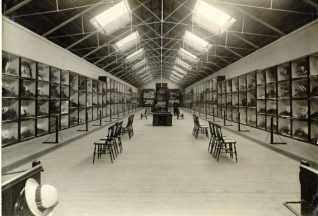 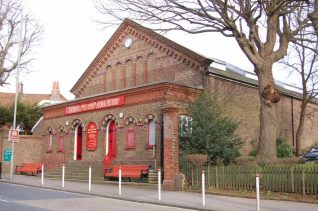 e) BOOTH MUSEUM OF NATURAL HISTORY: This building was erected in a quite isolated position in 1874 by Thomas Booth to house his collection of stuffed British birds displayed in their natural habitats. Following Booth’s death in 1890 the collection was offered to the Natural History Museum at South Kensington which declined owing to a lack of space, but his widow then presented the museum and its 308 exhibits to the town in October 1890 on condition that the display cases should not be altered. The museum was formally opened to the public the following year, and the bird collections have since been augmented by several other private collections.
In 1973 Booth’s was redesignated a museum of natural history, and the town’s zoological, geological and natural history collections were transferred from Church Street; the new galleries were formally opened on 13 February 1976 by Dr Desmond Morris. Booth’s Museum now houses the second largest regional natural history collection in the country with 621,000 items, and contains displays of butterflies, moths and other insects; skeletons; reptiles; mammals; geological exhibits; and, of course, Thomas Booth’s birds in their original cases. It attracts around 50,000 visitors a year and maintains free admission.
Thomas Booth himself was born at Chalfont St Giles, Buckinghamshire, in 1840 and lived adjacently to his museum in Bleak House, demolished in about 1939 for the erection of Fairways and Elm Court.
{83,118-122a,123}