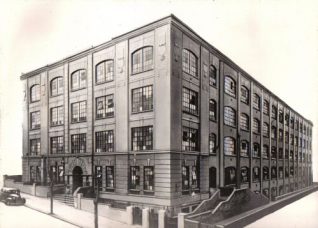 zoom
A photograph of the Old Diamond Works, Lewes Road
Photo from the private collection of Peter Groves

A scheme to train the disabled of World War
In the spring of 1917, the question of training soldiers disabled in the First World War arose. As a result of a successful pilot scheme, work started in 1918 to build a special factory in Coombe Road Brighton. The factory was known as the Bernard Oppenheimer Diamond Works, and was the backbone of a large undertaking, where the war disabled were trained to polish diamonds. The factory was one of the largest in the Brighton area. In the early days among the names of important visitors were General Smuts, Lord Haig, John Galsworthy and Mr Horatio Bottomely. Of particular interest was the well equipped clinic, specially set up to deal with the employees, many of whom had lost limbs and needed specialist treatment.

Vacuum cleaners and irons
The factory was acquired by Hove Machine Tool manufacturer CVA in 1945. CVA had expanded in the post war period, and the old diamond works was one of a number of factories they acquired in the Brighton area in the 1940’s and 50’s. CVA used the factory for a number of its departments, and was home to many projects, fractional horsepower motors, drill chucks, lathe chucks and surprisingly domestic appliances. The domestic appliance venture came about due to the forethought of Eric Aron, who had been the Managing Director of CVA since 1933. Following the Second World War, Eric Aron felt that there would be a war surplus of machine tools, that would flood the market, and he looked to diversify into other markets. Because the likes of Hoover and other domestic appliance manufactures had been engaged in war work, their production lines had been dismantled. He felt that if he could get into this market quickly, he could obtain a significant portion. Two main products were manufactured at the Coombe Road factory, the CVA Columbine vacuum cleaner and the CVA electric iron. The Company did have some success with these products in the post war period, however they were based on pre war designs. As soon as the likes of Hoover got back into production, with new designs and new materials, CVA found it difficult to sell their products and production ceased.

Under the watchful eye of instructors
For many years CVA had worked with US manufacturer Kearney & Trecker Corporation. In 1966 Kearney & Trecker took controlling interest of CVA. Kearney & Trecker were innovators of computer controlled machines, many of which had been involved in the US space programme. Hi-tec machines required highly trained engineers, CVA had for many years had a good apprenticeship scheme, under Kearney & Trecker the apprentice training school was to have its headquarters in the old diamond works. In the late 1960’s and early 70’s up to 60 apprentices each year spent the second year of their four-year training in the Coombe Road training school, under the watchful eyes of the instructors, Mr Bob Mann, Gill Percy, Tom Muggeridge and Ron Poulton. These instructors had between them well over 100 years of engineering experience to pass on to the young lads!