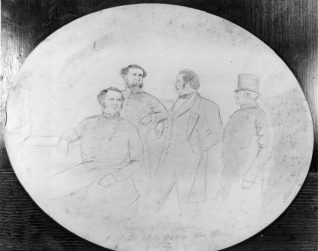 a) ORIGINS: For centuries law and order in the town was kept by the high constable and his assistants {162}, but by the nineteenth century Brighton had grown sufficiently in population and status to warrant better policing. The 1810 Brighton Town Act authorised the town commissioners to appoint eight ‘watchmen’ in January 1812 to patrol the town at night; another sixteen were appointed by December 1815, and were assisted by patrols of inhabitants and one special constable until 1818. In January 1821 the town was divided into eight watch districts, each with a box for the watchman; two years later the watch force consisted of sixteen men under the control of two superintendents at the old Town Hall in Market Street . The watchmen were dressed in top hats, black tail-coats and white trousers, and were armed with batons and rattles; until 1829 they also called the hours and the weather.
In 1830 a Mr Pilbeam was appointed as chief officer of the watchmen in an attempt to establish a more permanent force, but it proved to be largely ineffective and the men were eventually dismissed. They were replaced in 1838, however, by the first fully professional police force in the town, based at the new Town Hall and consisting of a chief constable, two superintendents, a night constable, three inspectors and twenty-four men. On 13 March 1844 though, the chief constable, Henry Solomon, was murdered at the Town Hall by one John Lawrence who was subsequently hanged at Lewes Prison. {112,163,164}