A potted history and photographic gallery 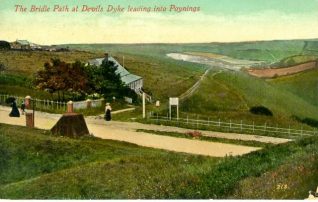 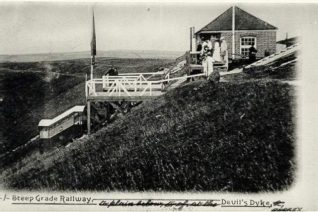 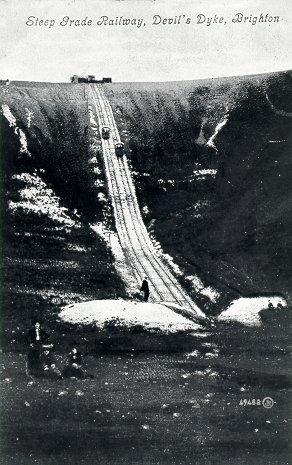 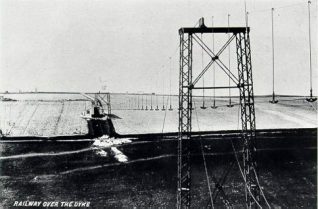 a) HISTORY: The Devil’s Dyke is a deep valley in the Downs to the west of Saddlescombe and five miles north-west of Brighton in the parish of Poynings. The adjacent hill has no particular name of its own, but is crowned by an Iron Age hill fort and, at 711 feet above sea-level, has magnificent views over the Weald. The legend of the Dyke is widely known: it is said that the Devil dug the chasm to allow the sea to inundate the churches and pious inhabitants of the Weald, but an old lady, on hearing the noise, lit a candle and Ol’ Nick, believing it to be the rising sun, left his terrible work unfinished. In reality the 300-foot-deep valley was carved by tremendous amounts of water running off the Downs during the last Ice Age when large amounts of snow thawed and the frozen chalk prevented any further absorption; erosion was aided by the freeze-thaw cycle and the valley was deepened by the ‘sludging’ of the saturated chalk.

In April 1928 Brighton Corporation, through the initiative of Herbert Carden , purchased 190 acres of downland in the area for £9,000. It was dedicated for public use by the Duke and Duchess of York on 30 May 1928 when a commemorative seat was unveiled; the inscription reads ‘God gave all men all earth to love’. The Dyke has always been a popular resort for Brightonians and there has been a refreshment building of some sort there since 1818. The first hotel building, designed by George Cheeseman, was erected in 1831 but replaced in 1871; the second hotel was burnt down in 1945 and the present structure built in 1955. Tourist attractions at the Dyke since the late nineteenth century have also included a funfair, bandstand, observatory, camera obscura and coffee rooms. Both William IV and Queen Victoria visited the Dyke while staying at Brighton.

From 24 July 1897 until 1908 a steep-grade railway (maximum gradient 1:1.5) ran down the northern slope of the hill to a point west of Poynings village; the two cars carried fourteen passengers each, some 275,000 a year. The course of the railway may still be seen from the underhill lane together with the concrete base of the hill-top terminus. Across the Dyke itself ran a cable railway, suspended from two pylons 650 feet apart and providing an exhilarating trip 230 feet above the bottom of the defile. This latter attraction operated from 13 October 1894 until about 1909, but the concrete pylon bases may still be seen. A short ‘switchback railway’ or ‘roller-coaster’ also operated near the hotel. All these attractions were launched by the hotel landlord, a Mr Hubbard, but proved so successful that they took trade away from the hotel itself and he was eventually forced to close them. {79-82,109}