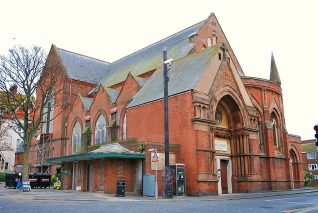 c) ST MARY’S CHURCH: At the corner of Upper Rock Gardens stands St Mary’s Church , originally built by A.H.Wilds in classical style in 1826-7 for Charles Elliott in the grounds of the East Lodge, the home of the Earl of Egremont. Said to be a replica of the Temple of Nemesis at Athens, it had a portico of four fluted Doric columns. Elliott’s son, Revd Henry Elliott, the founder of St Mary’s Hall School, was installed as curate. In June 1876 however, part of the roof and walls collapsed, and so the church was completely rebuilt in 1877-9 by Sir William Emerson in French Gothic style, in red brick with red-sandstone and terracotta dressings; a planned south-western tower was never erected. The interior of the listed church has an unusually long nave spanned by immense arches, and can hold 1,000 people. {1,3,45,64a,115}