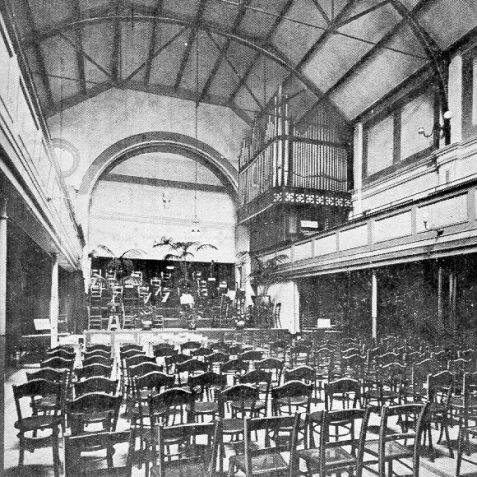 Concert Room at the Athenaeum Hall, c. 1911: The Athenaeum Recreation Hall stood at 148 North Street and was entered through a narrow passage. It opened in 1890 and was used by the Brighton School of Music from 1892 onwards. The concert room pictured here could seat 500 people. Later used as a billiard hall and the Central Spiritualist Church, the hall was demolished in 1962 for the erection of Prudential House and road widening.
Image reproduced with kind permission from Brighton and Hove in Pictures by Brighton and Hove City Council 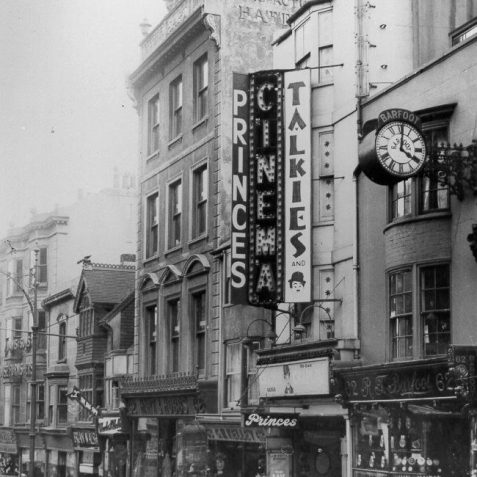 Princes Cinema, 1933: The Prince's Cinema in North Street following the introduction of a new foyer and a neon lit facade. A cinema first opened on this site in 1911, known as the Bijou Electric Empire. Following 7 name changes, including a spell as Brighton Film Theatre from 1969 to 1978, it closed as the Cinescene in 1983. It has now been refurbished as a fast-food restaurant.
Image reproduced with kind permission from Brighton and Hove in Pictures by Brighton and Hove City Council 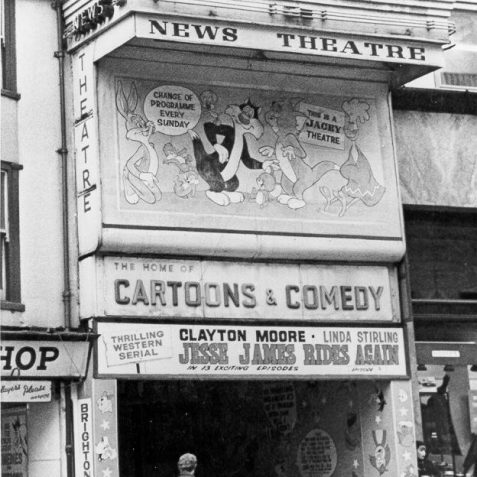 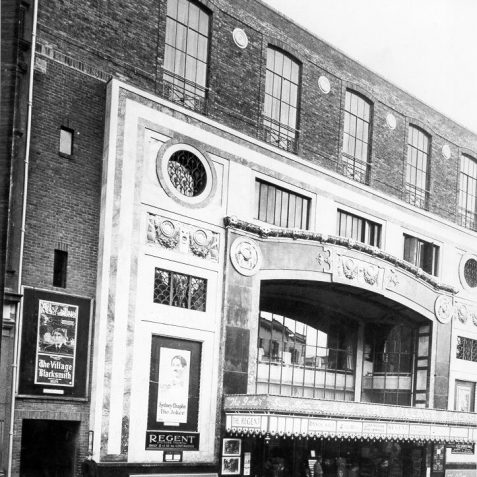 Regent Picture Theatre, c. 1930: Opened in 1921 at cost of over £400,000.it was designed by Robert Atkinson with a classical interior by Walpole Champneys. Seating about 3000 people, it was considered the most luxurious cinema in Britain.This photograph was taken after the Regent Dance Hall had been built on the roof in March 1923. The dance hall became a Bingo Hall in 1967. The cinema closed on 14 April 1973, and was demolished in 1974. The site is now occupied by the Boots store.
Image reproduced with kind permission from Brighton and Hove in Pictures by Brighton and Hove City Council

d) CINEMAS and the ATHENAEUM HALL: There were once three cinemas in North Street (along with an entrance to a fourth, the Regent– see ” Queen’s Road“). The Essoldo, now the Top Rank bingo hall, opened as the 1,877-seat Imperial Theatre on 9 April 1940, staging both plays and variety shows, but by 1943 film shows were alternating with stage shows. In 1947 impresario Jack Hylton presented plays and musicals, and the building was also used occasionally for conferences and wrestling bouts, but it then reverted to movies only as the Imperial Cinema and became the Essoldo in 1950. The cinema closed and became a bingo hall in May 1964.

Higher up on the other side, The Bijou Electric Empire opened in 1911 at no.63a, the former printing works of the Southern Publishing Company. In 1915 it became the Prince’s Electric Theatre, the Bijou Select Palace in 1918, and the Prince’s Cinema the following year. Sound equipment was installed in late 1929, and the building was transformed with a new foyer and neon-lit facade in 1933. In 1947 the cinema became the Prince’s News Theatre and then the Jacey in 1967, but was taken over in association with the British Film Institute in February 1969 and showed specialist films as the Brighton Film Theatre. This venture closed in late 1978 following financial difficulties, but the building was reopened as the Cinescene on 10 September 1979 by Myles Byrne, and continued until June 1983. In 1988 the building was refronted as a Burger King restaurant.

The Cinema-de-Luxe or Theatre-de-Luxe opened in about 1910 {83} at 150 North Street, the former printing works of the Brighton Gazette. It held 529 people, unusually with no circle or balcony, but was burnt out by a fire in 1942. At 148 North Street, approached via a narrow passage, stood the Athenaeum Recreation Hall which opened in 1890. Seating 500 and with smaller lecture rooms, it was used by the Brighton School of Music from 1892, and later accommodated a billiard hall, the First Church of Christ Scientist, and the Central Spiritualist Church in 1925. Both the hall and former cinema building were demolished for road widening and the erection of Prudential House in 1962. {68,68a,83,123}