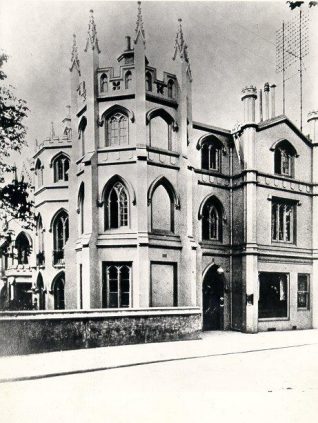 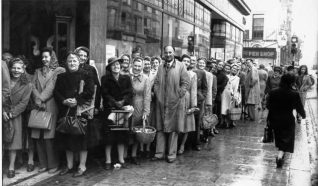 zoom
Shoppers queuing to enter the summer clearance sale at the Plummer Rodis department store in July 1947. This store subsequently became Debenhams until 1998.
Image reproduced with kind permission from Brighton and Hove in Pictures by Brighton and Hove City Council

c) DEBENHAMS and WESTERN TERRACE: However, the most interesting building in the whole road is the Gothic House, a listed building of about 1823 by Wilds and Busby with crocketed turrets and spires, their only venture into Georgian Gothic architecture. It was also known as The Priory or Priory Lodge, but was converted into a shop in 1898 for Sharmars drapery. Now forming part of the Debenhams store, it was extended westwards in 1880 by W.H.Stevens, while part of its eastern facade unfortunately hidden by an extension for Plummer Rodis Ltd of 1920.
The adjacent road leads to Western Terrace, a small, stuccoed, listed terrace with ammonite pilasters built in about 1827 by A.H.Wilds but used since 1920 by the adjacent store. Opposite the terrace is the grade II*-listed Western Pavilion, built in Oriental style in 1831 also by A.H.Wilds as his own residence. The house has a large Indian dome and Hindu details, and was used an office and confectionery from 1931. It was later acquired by Debenhams but has now been restored as a house; the dome contains a large bathroom. No.8a at the end of the road was probably a coaching lodge for Sillwood House, the mansion adjoining Western Terrace. An excellent model of the whole area around Western Terrace may be found in Brighton Museum. {44,46,123}