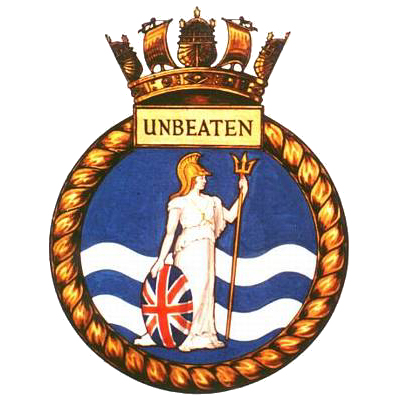 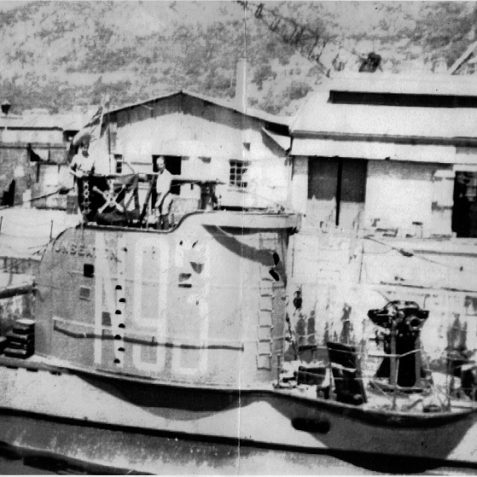 H.M.S. Unbeaten alongside in Gibraltar during her voyage home to the UK for refit in August 1942. The ship's 'Jolly Roger' is being displayed by some crew members on the conning tower. The letters on the side of the conning tower read 'N93' her pennant number.
Photo: From the private collection of Mrs B. Woodward. 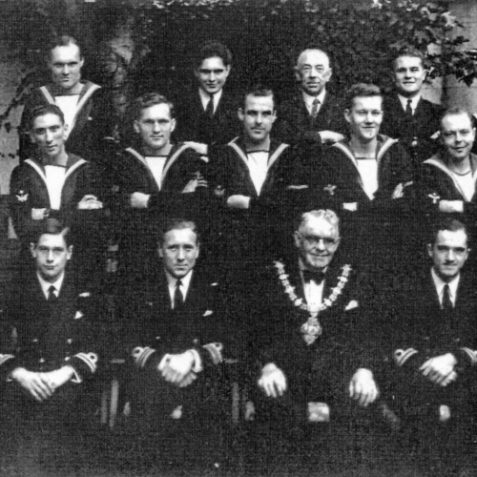 Lieutenant-Commander Edward 'Tedddy' Woodward, DSO, RN (front row third from left) with members of Unbeaten's crew pose with the Mayer of Hove Councillor A. H. Clarke.
Photo: From the private collection of Mrs B. Woodward. 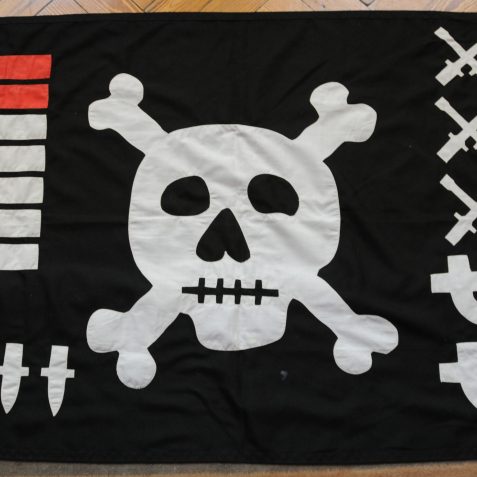 Replica of the 'Jolly Roger' flown by HMS Unbeaten. This flag shows a record of her successes against enemy targets.
Photo by Tony Mould

During the second week of  March 1942 the Hove Borough Council ran a National Savings ‘Warship Week’ campaign to raise funds for the war effort, their target was £425,000, on achieving this goal the town was able to “adopt” a warship. The final tally of funds raised was £521,000 and the submarine H.M.S. Unbeaten was “adopted” by the town.

H.M. S. Unbeaten was a ‘U’ class submarine built by Vickers Armstrong ship builders in Barrow-in-Furness and she entered service on November 10th 1940 At the time of her “adoption” H.M.S. Unbeaten was operating in the Mediterranean as part of the 10th Submarine Flotilla under the command of Lieutenant-Commander Edward ‘Teddy’ Woodward, DSO, RN and was engaged in anti-shipping operations against German and Italian vessels.

A silent hunter, a distinguished record

Between December 1940 and July 1942 the Unbeaten had sunk the German submarine U-374 and the Italian submarine Guglielmotti, the Italian sailing vessel V 51 / Alfa, and the Vichy-French merchantman PLM 20.  She also torpedoed and damaged the Italian merchantman Vettor Pisani which was later sunk by British aircraft. She returned to the UK in August 1942 for repairs and a refit after being damaged in Malta

Presentation of the ‘Jolly Roger’

Shortly after their return to the UK the commanding officer and some of the officers and crew were entertained privately to lunch at Hove. Speaking to the Brighton & Hove Herald about the occasion the Mayor said “as long as our destiny and our fate rest upon the efforts of such men as I met  we need have no fear of the ultimate outcome of the present grim struggle.” During this meeting the ships ‘Jolly Roger’ flag was presented to the Mayor. This was a special flag unique to submarines; permission to fly the Jolly Roger was normally granted to a submarine after her first successful patrol by the Flotilla Commanding Officer. The crew would then sew on the appropriate emblems following each successful action; the flag would then be flown when entering harbour at the end of each patrol to signify the success of the patrol. Unfortunately this special gift was lost when the Hove Town Hall was bombed during a German air raid.

Later, on Wednesday December 9th, an impressive ceremony was held in the Hove Town Hall at which a commemorative plaque from the residents of Hove was exchanged for a replica of the ships badge by the Mayer of Hove Councillor A. H. Clarke, and Rear Admiral D. W. Boyd, -C.B.10., D.5 C., representing the Admiralty and the Unbeaten which had left the UK early in November to return to Malta.  Hove’s plaque, to be placed in the submarine, bore the inscription that the sum raised in Warship Week was equivalent to £10 per head of population, men, women and children.

Sadly at the time of this presentation dinner HMS Unbeaten has been reported lost, a fact that was not made public until December 19th when the  Brighton & Hove Herald carried the story that the Admiralty had announced the submarine was “overdue and must be considered lost”. Unbeaten had sailed for the Mediterranean via Gibraltar after a refit in Britain under the command of her now C.O. Lieutenant. Donald E. O. Watson, DSC, RN. On 11 November 1942 she was attacked and sunk in error by an RAF Wellington of No. 172 Squadron, Coastal Command while in the Bay of Biscay. She was lost with all hands.

This article was composed from materials originally supplied to the office of the Mayor of Brighton & Hove by Mrs, Barbara Woodward, widow of the late Commander ‘Teddy’ Woodward D.S.O.** Unbeaten’s first commanding officer. Special thanks to Mrs Pat Dines, Mayoral Secretary for allowing access to this material.