Letter to a POW from Buckingham Palace, 1918 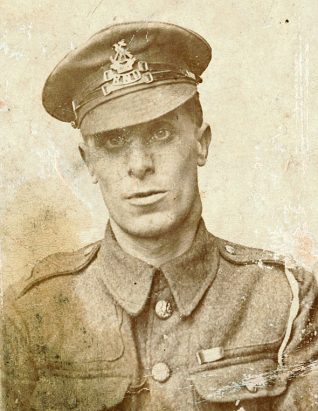 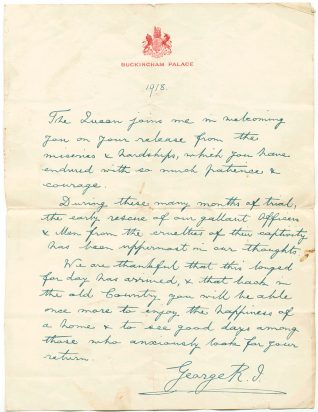 zoom
Letter to Alfred Langrish from Buckingham Palace, 1918. Click on the photo to see it fullsize.
From the Letter in the Attic collection

Alfred Langrish was born on 18th October 1886 at 2 Middle Street, Portslade, Sussex. When war broke out in 1914, Alf was in his late twenties. He served in the Gallipoli campaign as a Lewis Gunner and fought in the French trenches where he was wounded and taken prisoner in 1918.

He was sent to Langensalza POW camp in Germany (the location is now called Bad Langensalza), where he recovered from his wound in the camp hospital. Many of the camp prisoners worked in the local salt mines.

Alf wrote home from the POW camp to his wife Florrie and four children Alfred aged 9, Ivy 7 and George 5. Only two letters survive. It seems that the letters are the final ones in a sequence, but this is not certain. The letters have been shared with the Letter in the Attic project.

A letter from Buckingham Palace

After 10 months in the POW camp, the war ended and Alf returned home. He received a letter from Buckingham Palace wishing him well on his release.

“The Queen joins me in welcoming you on your release from the miseries and hardships, which you have endured with so much patience and courage.

During these many months of the trial, the early rescue of our gallant officers and men from the cruelties of their captivity has been uppermost in our thoughts.

We are thankful that this longed for day has arrived, and that back in the old Country you will be able once more to enjoyed the happiness of a home and to seek good days among those who anxiously look for your return.

After the war Alf worked at the engineering firm CVA in Portland Road Hove until he retired. He died aged 76 three years after Florrie, and is buried in Portslade Cemetery. George, his son, remained in the house at 55, Church Road, Portslade, after Alfred’s death, and the letters were found when George died in 2003 and passed into the possession of Jan Hamblett, who was Alf’s grand-daughter.