You are here: HomenextTopicsnextWeathernextThe Great Storm 1987nextWoken by a great storm

Woken by a great storm 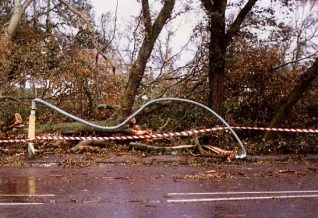 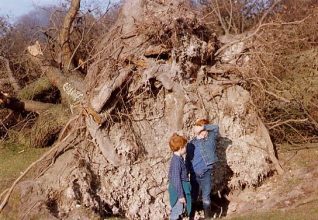 In the early hours of 16th October 1987 I was awoken by a strange whirring sound. Then I heard the windows rattle which made me realise it was the sound of the wind, a sound I’d never heard it make before – except in the movies.

An unremitting roar
I put the bedside lamp on; it didn’t work. I woke my wife as I got up and switched on the main light. It was the same – no light. We had a street lamp outside our home, but tonight that wasn’t working either. I fumbled round in the darkness and found a small torch. As I moved about the house I was ever aware of this unremitting, unnerving whirring roar outside, which threatened to invade the home at any second. I went into the back bedroom and found my older boy was already awake. The wind direction was south-westerly, and the back of the house was taking an even bigger pounding than the front where our bedroom was. I brought him into our bedroom, and then went and to fetch my younger boy, who was also in a back bedroom. He was sound asleep, despite the wail outside, and probably would have gone on sleeping through the night unaware of the drama unfolding.

No electricity
I then found an old battery transistor radio which had long ago been abandoned in a drawer. The four of us huddled together in bed. The gas central heating had been off for some hours now and the house was cold. With no electricity it couldn’t be switched on. I fiddled with the radio for some time but failed to find a station that could enlighten us as to what our situation was. And so we continued until the cold light of dawn allowed us to move around the house freely by which time the wind had subsided and a sense of relief cheered us, even though we couldn’t even boil a kettle. The phones were still working and we exchanged calls with relatives. Then after a cold breakfast we dressed and went out to witness the results of the night’s storm.

Damage all around
Fortunately for us, our own home had suffered no more damage than a loose roofing tile, but all around town we saw extensive damage – houses with half their roofs ripped off, walls blown over. But the most obvious evidence of destruction was the fallen trees that littered the parks and streets. Brighton had many trees and that night many were lost.